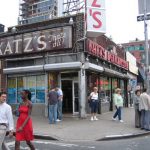 I am not a secular Jew so undoubtedly this post was flawed from the start. I have many secular and non-religious Jewish friends and family. As the series of Stuff Jewish People like moves down the line, I am randomly picking groups of which I can make fun. The other problem with this post is that while many orthodox Jews consider conservative and reform Jews to be secular, they aren’t actually so – so I just kind of lumped everyone that isn’t orthodox together.


Kosher Style: I find it kind of sad that the most popular “kosher” delis in New York are all treif. Actually, it kind of sucks. Katz’s, Carnegie Deli and 2nd ave Deli are all kosher style. Secular Jews love a good pastrami sandwich no matter how kosher it actually is. Even Schimmels Knish shop isn’t kosher. Kosher Style means that it has the style of kosher food (like the pastrami sandwich) without actual rules of kashrut.

Holocaust Remembrance: There is nothing wrong with being obsessed with the Holocaust. It is a good thing to be obsessed with one of the strangest and most terrible events of the modern era, especially since the anti-semitic events in Europe are heating up again.

Social Justice: I think social justice may be the modern day catchphrase like Tikkun Olam. To  secular Jews, things like AIDS, Darfur and the environment are as important as Jewish causes if not more so. Who cares what Glenn Beck says?

Democrats: Almost every non-religious Jew I know is a democrat. Most secular Jews always go on rants how they can’t understand why any Jew would be part of the Republican party – the frummies do the same about the Democrats.

Kosher in the home: I recently went to someone’s house that keeps kosher in the home. I looked in their fridge and nothing was kosher. I decided to ask them and they told me that they don’t eat any non-kosher animals and have separate dishes for milk and meat. This is not the norm – I know plenty of secular Jews that keep mostly kosher in the home – save for some shady hechshered products and things like maple syrup that they think doesn’t need to be certified kosher.

Lifting people on chairs: I never knew it was a distinctly Jewish concept to lift people up on chairs at weddings but I guess according to the secular Jewish crowd it is. At Orthodox weddings they do tables and at secular weddings they pretend to be frum by doing the napkin holding thing.

Bagels: I didn’t grow up thinking that bagels were a Jew food, I just thought Jews liked them because they were cheap. The obsession with bagels just doesn’t reach the orthodox community.

Manishevetz: The only time I have ever seen Jews drinking Manishewitz was in yeshiva and that was only because the winery was located near the yeshiva and we got free wine. I have heard from several people that they thought the only kosher wine was Manishewitz and they had to be convinced otherwise.

Shiksa: There are countless books written about shiksas and their appeal to Jewish men, frummies use it negatively and secular Jews use it endearingly. I wonder if the term shiksas are for practice came out of frum or secular minds.

Talit: Secular Jews are obsessed with wearing their Talesim whenever they enter a shul. The men and women both wear them and they always wear them like a scarf, they also wear them at every prayer service and very rarely are they plain old black and white. Secular Jews come up with some pretty strange looking Talitot.

Affiliations: As an orthodox Jew I never really cared much about affiliations, within orthodoxy it’s all about little things like dress and yarmulke style. In other movements it’s about theology – mostly because non-orthodox Jews like to screw with the theology and their views every time they realized their last change failed.

Healthy Food: Secular Jews are all about eating healthy and light, go for shabbos once and you will see a table of salads, fish and dairy – it’s really a terrible thing not to eat meat on shabbos.

Kabbalah: What is the deal with kabbalah? Secular Jews go nuts over it and Chabad were the first ones to realize they could market chassidus as kabbalah.

Interfaith: Secular Jews love interfaith events where they get together and try to open each others minds to why their religion is so open minded. They usually bribe Muslims to come with promises of food and the ability to scope out the shuls floor plan before the next terrorist attack.

Chanukah: Secular Jews are really into Chanukah. It may have something to do with the Adam Sandler song or their need to feel different then the Goyim, while still trying to gain acceptance from them at the same time.

Women Rabbis – can someone give me some insight into why a google search of woman rabbis reveals that many of them are very ugly?

Orthodoxy: I love getting secular Jews riled up about orthodoxy and it seems they love ranting about it. Unlike Orthodox Jews, secular Jews don’t think we are any more or less Jewish than them.

Halacha: Ever since the 1950’s takana that gave conservative Jews a “heter” to drive to and from shul on shabbos, secular Jews have had a strange relationship with halacha. They don’t want to just throw it all away, so they pick out stuff to keep and stuff to break, I am kind of surprised that no one has rewritten the torah yet. I am also wondering when the really short secular Jewish Kitzur Shulchan Aruch is going to be released — the Kitzur Kitzur Shulchan Aruch?

Cholent: Whenever I get into food discussions with secular Jews they tell me they make funky cholent. This means that instead of cholent they make bean stew, or lentil soup or chicken in a crock pot. Secular Jews don’t do cholent.

Taharas Ha’mishpacha: Secular Jews think family purity laws are the worst thing in the world. It’s demeaning to the women (who have control over their sex lives now) to be called impure, why is a natural phenomena impure.

Kiruv: Kiruv organizations are like missionaries. They convince young impressionable college kids to leave their secular lifestyles and become religious — a terrible thing if you aren’t religious and fear religious people.

Settlements: It kind of goes along with the general left wing nature of things, so while many secular Jews are into Israel, many of them do not like the settlement concept.

My computer is still experiencing technical difficulties can only access open networks, this is why posts are a little more sporadic than usual and my responses to comments and emails have been greatly reduced, I hope to fix the problem by the end of the week.

← Shabbos with the Motorcycle Rabbi
Vaad Hatznius guidelines regarding laundry →