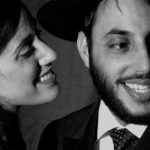 By Yocheved Sidof originally posted on Alef Next

What comes first, the chicken or the egg? What about love or sex? In my life, Love came first; or so I thought…

I grew up in a tightly knit Chassidic community in the Midwest, the first-born child of Iranian immigrants. I was raised with a lot of rules. Some were religiously influenced and others were cultural, but one of the big rules – NO Boys – fell equally into both categories: big-time religious and cultural no-no’s. According to the laws of Tzniut (modesty), boys and girls are separated from a very young age. There is very little socializing, and absolutely no touching, between opposite genders in strict Orthodox communities. (These laws are meant to sensitize us to the power of attraction and the sanctity of sexuality). That aside, there was no way my parents would let their Persian Princess be swept off her feet too easily; it just wouldn’t fly.

I came to New York City at the vulnerable age of seventeen to attend Stern College for Women. It was my first independent foray into this crazy “concrete jungle where dreams are made of” (Sorry, I couldn’t resist). Suddenly, I was surrounded by tons of women who were hanging out with guys, dating, looking for The One. My friends covered the whole spectrum: some dated without touching their partners at all, while others slept with their boyfriends. I fell somewhere in the middle. (Don’t tell my parents.) As I searched for my soulmate, I had one big rule – I would only have sex with my husband.

The issues of touch and sexuality were never so clear-cut for me. My convictions were totally in-line with my upbringing, but it was hard to hold stead-fast when there were so many pressures to deal with. Then, after years of tumultuous relationships and broken hearts, I met my man. We shared common interests, common values, and common goals, but we never shared a bed; we wanted our intimate life to begin as a committed, married couple.

We both believed in the sanctity of sex, and wanted to express that union of body and soul only within the context of a committed marriage. Sure it’s a risk (we all know the ‘test-drive a car’ analogy), but it was a risk we felt was worth taking.

I’m directing a documentary called Can’t Touch This, about the laws surrounding premarital intimacy in Judaism, i.e. Shomer Negiah. We have on-camera interviews with Rabbis, sex therapists, psychologists, and educators, and most importantly, hours of honest conversation with people who grapple with this question almost everyday: What is the interplay between religion and sex? How, if at all, does a person’s belief in G-d inform his or her sexual choices?

FYI:They have me ranting on street corners in Crown Heights about my views on shomer negiah – which are quite complex.

For one of my favorite shoots we traipsed to Times Square, camera in tow, to get some man-on-the-street interviews. Under the tantalizing billboards of scantily-clad men and women, we asked our fellow New Yorkers questions about sexuality, such as: How often do you think about sex? How did you learn about sex? What is meaningful touch? If in a relationship, how long would you wait to have sex? One honest man offered this take on building sexual compatibility: “If you have the mental chemistry, and you’re hitting it off, I believe the sex can be just as exciting. It just has to be… nurtured. And I just have not been lucky enough to find someone with that kind of patience. We live in a fast food society, fast sex, everything is fast. I don’t have time to practice with you. We’ve got to get it right the first or second time, or I’ve got to move on.”

I didn’t decide to marry my husband based on our sexual compatibility, how great he is in bed, or how quickly we each learned the other’s desires… I didn’t have any idea how we’d vibe together as a sexual couple. We formed our shared sexual identity as a married couple, and that created a beautiful, yet very vulnerable, sense of intimacy. Love and sex were woven together in a cycle, allowing each to nurture the other. It definitely wasn’t seamless, but I knew that even if our intimate life wasn’t perfect, I wasn’t at risk of losing him–he truly loves me for me, and not for how adept I may be in bed. We would work through the rough patches, and commit ourselves to gratifying each other–not for sex’s sake, but for love’s.

And you know what? That man-on-the-street is right. We do have unrealistic expectations about sexual gratification. Popular media totally misleads us about how sexual compatibility is formed. It’s not instantaneous. Nobody has ‘great sex’ right away. It takes time, practice, sensitivity, commitment … and a whole lot of love.

Yocheved Sidof is a photographer, filmmaker, and teacher who lives in Brooklyn, NY.  She and her husband Yossi are the proud parents of Reuven Uriyah, 4 years old, and Ma’ayan Chaya, 22 months.

75 comments for “Sexual compatibility did not decide my marriage”