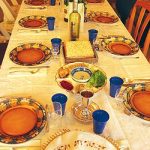 I have never done a post on the different types of Pesach seders, because it’s not really something that can be done conclusively, stereotyping different Jews is much easier. Everyone’s seder is different, bt I will try and formulate some sort of list of the Pesach seders I have attended in my lifetime, which should definitely resonate with many of you. Check out this list of 5 different alternative Pesach seders on Jewcy.

Maxwell House: The Maxwell House Haggadah is probably the most commonly owned sefer, Jews of all walks have probably had a Maxwell House seder at some ;point in their lives and I used to have them at my aunt and uncles house in Buffalo. We would choose to read in English or Hebrew, one of their sons would be wearing a big frilly white yarmulke from Sol and Sues wedding in 1953 and while we read the whole haggadah cover to cover, divrei torah were non-existent, unless you counted the bickering over the farshtunkanah liberals, because that’s where every meal with my father goes. I am almost positive that there are folks who believe that Maxwell House has a monopoly on the manufacture of haggadahs and wonder how they beat out Starbucks.

Ma Nishtana Intensive: You would think that an entire month of a Jewish child’s education was devoted to the Ma Nishtana, what gives? Is it really that important? It seems to me that it’s a love hate relationship, kids either love saying it or hate saying, but either way the parents force them to say it, sometimes with the clever cajoling of a sex offender – slowly getting the child to come out of their shell and take some candy in return they have to jump in the car, ahem, say the Ma Nishtana. Why can’t one Ma Nishtana by the youngest kid be enough? They have to say it in Yiddish and English too? I have been at sedarim where the kid said it in Spanish and French. Then if the kid doesn’t want to say it, the older folks whisper it in sing song, trying to get the kid to say it. To me the whole Ma Nishtana affair is pointless and just an excuse for parents to feel good about dropping 20 grand on yeshiva tuition.

Singing Intensive: I like the singing intensive seder, all of the famous songs are sung, and then all of the speed readers organize and run through everything in Hebrew so the unaffiliated folks don’t have to wait 3 hours for the food.

Divrei Torah Intensive: My father would always complain how the sederim filled with divrei torah rarely fulfilled the obligation of yetziyas mitzrayim and that everyone at the table would just be trying to one up each other with their fancy gematrias, and finding obscure sources to explain how the women would get their husbands to sleep with them by using mirrors. Divrei Torah are great, when they are short, I would rather a bunch of shorter divrei torah than a couple of those long and drawn out numbers intensive things. Yeshivish sederim that are divrei torah intensive usually read the haggadah in Hebrew solo, and skip many of the songs. While more modern sederim will sing everything and go around the room to make the seder feel more cohesive when it comes to reading the haggadah.

Speed Reading: I have been to sedarim when they started off together and during karpas time it started to drag on when suddenly some of the seder may branch off on their own – this happens at communal sedarim – I always wondered what the point of rushing would be unless you could get your shulchan aruch faster. At chabad sedarim, the folks who know how to read will quickly read all of the boring and non-politically correct stuff, and then stop at the famous items like dayanu and the four sons.

Is this ever going to end: The Rabbis were smart when it came to designing the seder, they knew that if they put the meal right at the beginning, no one would stay for magid, so they made us suffer and in the process they allowed another excuse for Jews to show off to one another. Halfway through magid, I usually start eating whatever potatoes and parsley is left from karpas,  I want to leave, but I can’t. I am invested in this thing and I am going to get to the meal – that said, there is nothing worse in Jewish life than a bad pesach seder meal – waiting two hours to discover burnt chicken and bagged lettuce is my worst nightmare, and this is one of the reasons I don’t just go to random pesach seders, the people I go to have to be proven cooks. The entire point of having a long drawn out seder is so the people who ran or went to that seder can brag about it in shul the next day – I see no other purpose.

Social Seder: Besides for the fact that people will be too tired to go home with you afterward, pesach seders are great for meeting the opposite sex. If there are singles at a seder, you can be sure they will sit you together, then you have hours to make an impression. You can go for the I’m so frum I won’t talk to you while others are speaking, to the all out socializing session that ends during a walk for fresh air during nirtza. Social sedarim are usally less intensive on the seder and more intensive on the famous songs. I have been to sedarim that went smoothly only because half of the people present were unengaged in the activities – they did their thing and the people who ran the seder did theirs.

Family Seder: I have never in my life been to a family seder, it’s just not our thing. If we did have one it would have been all of 40 minutes and we would have all been sitting in our shorts and t-shirts. With that said, I wish you could wear comfy clothing to a seder, I am sure women rock the shoulder padded shabbos robes – but they haven’t started making them for adult men yet. Family seders always seemed boring, but I guess growing up on large sedarim shaped how I do it now.

Hotel Seder: My all time personal fave is the hotel seder, they would always put us with other weirdoes, because that’s what happens when you have a single parent. Some rabbi would be leading the room and my family would bust out on our own, run through the seder while my dad read us stories from his Carlebach Haggadah (the old man really didn’t go for traditional seder songs – not his thing) The absolute best thing about doing your seder at a hotel, besides for all of the cute girls, is being able to start the meal at any time. We haven’t been to a hotel since they started charging more than $1000 per person.

Chabad Seders: I have been to a couple of chabad sedarim, at one of them my father crumbled matzo into his soup under the table because he couldn’t take it anymore, he also dipped his matzo into horseradish and drank water without fully swalloing his matzo. Chabad pesach seders are great because they are so insane about gebrokts. You can be sure you will eat and store your matzo in ziplocl bags and if there is a beverage spill it seems like chabad women are prepared to call out the hazmat team. Did you know chabadnicks peel all of their vegetables and don’t eat any processed food – so if you’re into the whole non-processed food culture hit up your local chabad house on esach – they even make their own mayonnaise.

Greek Symposium: My second night seder this year will be in San Francisco and my hosts told me it is going to be a Greek Symposium, I guess that’s what happens when you get a bunch of well educated foodies together at a pesach seder. I really have no idea what to expect.

Shul Seders: This year is the first time I am going to a community seder in a shul, so I guess I will report from there.

20 comments for “What type of Pesach (Passover) Seder do you have?”