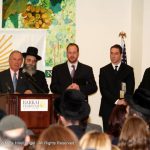 Black Hat groups are rejoicing over the Yeshiva Tuition Reform Bill that was passed by the United States Beis Din earlier today. The YTR Bill, passed by an overwhelming majority, seeks to combat the Yeshiva Tuition Crisis which has wreaked havoc on American Jewry for decades now, forcing some parents to even consider public school, keeping less than glatt kosher and forgoing traditional kollel lifestyles by getting college degrees and making a living instead.

We were at Agudath Israel’s headquarters in New York yesterday when the bill was passed. Cake and schnapps appeared and it turned into a melody of chants of l’chaims and mazel tov.s. It was an amazing scene. However, the mood was not so bright in Federations and other less religious strongholds such as the Orthodox Union, who say that the bill undermines the entire education system. Many groups claim that the money needed to fund the tuition bill will come from things like kosher food price gouging, higher synagogue membership fees and paying teachers way less, which undoubtedly will adversely affect education quality.

Many dissenters have also told us that they simply don’t want anyone telling them where they should send their child to school. They are saying that this yeshiva tuition bill is simply socialism in disguise and that the Beis Din used the tuition crisis to their advantage, by playing off the fear that children will end up in public school if they didn’t find a way to send every child to yeshiva whether the parents could afford it or not.

According to Federation Spokesperson Talia Johnson-O’Mally “This Yeshiva Tuition Reform Bill is simply going to force Jewish children to attend certain schools, obviously those endorsed by the Beis Din, forcing other schools to close down for lack of funding. This Bill will also hurt Jews who do not send their kids to yeshiva, by forcing them to pay higher prices for other services that Jewish people need – like brit milah, bar mitzvah lessons and temple membership.” Mirroring many dissenters’ opinions, she was convinced that the bill was passed by socialists trying to take power away from the people. “They want to control the system, the quality is going to go downhill and people will have to ship their children to other countries for the education they deserve. Besides, these people could send their kids to public school – yeshiva isn’t a right.”

Many Chassidim jumped for joy at the news of the bill’s passing. One man told us that he could finally live fully off the government. He admitted that he was taught by his rebbe and friends that this was just socialism, but he didn’t understand how the government programs he was using already such as welfare, yeshiva busing, public libraries, police protection, section 8 housing and Medicaid weren’t socialist as well. “Socialism, Shmocialism, it’s free money and I’m poor, what’s the difference?” He also told us that as far as he could see everyone in America benefited off of this so called socialism in one way or another and that yeshiva tuition was a right for every frum person to have.

Many at the OU headquarters are baffled by the bill. Many people told us that they were trying to see if the bill actually provided yeshiva tuition, or if it was merely 2,000 pages of pork barrel legislation such as heterim for rabbonim to charge more for services such as kashering private homes, being mesader kedushin or checking mezuzos. Apparently the bill has many such items which explain where the money to pay for such a lofty venture will come from. At the end of the day, there is no such thing as a free lunch, or tuition in this case.