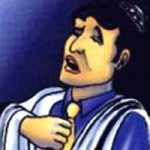 This past Friday night, a local man saved his own life by restarting his heart during a traditional Jewish prayer service. The incident happened at a local Young Israel when a man was saying the Shabbat evening prayer and by accidentally started off with the weekday service rather than the Shabbat service, he reached the point at which you hit your chest for repentance from your sins, at which point he realized he was saying the wrong thing and changed, he had no idea this move would save his life.

“I could hear him from across the room, he has been orthodox all of his life, yet when he clops his chest for selach lanu, you would think he was a flaming Baal Teshuva (born again Jew) he clops so hard, I think he feels he needs to do it extra harder because he probably has a lot of daily sins to repent for” Steven Feingold was at the Young Israel at the time, and told the man he was in the wrong part of the prayer. (In orthodoxy this can’t actually be done during prayer and so something called Davanese was invented using hand gestures and words like nu and uh)It is quite common for Jews to mistakenly say the weekday service on Friday night, orthodox typically say these prayers three times per day and a quick changeover is quite sudden.

The man who saved his life only found out later, during a regularly scheduled checkup that he had a heart attack in the first place. He just thought he couldn’t breathe because of his embarrassment when the entire shul looked at him and started speaking davenese, wondering why he was clopping selach lanu on Friday night.

There have been several cases of men restarting their own hearts, but from an accidental prayer, that happened to be done by a super hard selach lanu clopper in unheard of. It is simply a miracle.

← Best of Shul Awards
Letter to the editor: Frum Satire was never frum →