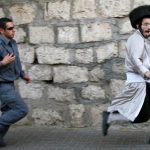 You may think your city is the worst, everyone always does, but let me tell you something from my personal experience, every city is bad. Every city has their yeshiva’s, semi kosher  vegan Indian restaurants, shuls with mechitzas that are- too short, see through, too tall, too thick, too thin. Shuls with too many women not covering their hair, shuls that make you cover your hair, shuls with too much talking, shulls with drunken Kiddush clubs, day schools that accept non-Jewish children, not frum enough day schools that hate frum folks, too frum day schools that won’t cater to your child, too much controlling chabadnicks, maybe a couple meshichists speak too much yechi for your taste, that donut shop with the controversial hechsher from a guy who sends his kids to coed camps. Or maybe you think all the frummies hate the modern folks, the chabadnicks get along with everyone but secretly disagree with the misnageds, or maybe the school board members are too frum and wont let their kids over at your house because they don’t keep triangle-K.

Or maybe your local butcher sells Hebrew national and glatt kosher meat, or maybe the local girls school has too few students and you decide to send your child away only to be avoided in shull, or maybe you adhere to a strict hashgacha and wont eat anywhere, or maybe your children are druggies/untznius/or just nebachs and you wont go to shull for fear of more “advice”.

Maybe the local vaad refuses hashgacha to a local pizza store because it is a hangout on moztoi shabbos, or maybe the vaad just controls everything. Maybe your new eruv was made by someone who only half the community holds by- you know who you are. Maybe the yeshiva is disliked in your town (very common) or maybe the yeshiva alienates all the people who don’t adhere to its strict policies, or maybe the local lesbian reform Rabbi bashes the gay hating orthodox folks, or maybe Jews are really bored with their lives and just like to argue. 2 Jews 3 opinions you know……

Now here is a list of places I have lived or been that claimed that they had the most problems of any Jewish community. Albany, Buffalo, Rochester, Washington Heights, Cleveland, Detroit, Denver, Los Angeles, Scranton PA, Pikesville MD, Providence RI, Monsey, Jerusalem, Miami, Salt Lake City, Chicago.

I cannot say who was the worst but many people will agree that every community has their problems and it all depends on willingness to shut up eat your flippin’ donuts and go about your business. Yeh I am sure its more detailed than that but since I don’t have any kids in school I guess that it’s my world view.

32 comments for “Every Jewish Community has Politics”