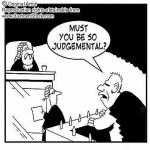 According to the survey, modern orthodox hatred of the black hat community is deeply rooted and philosophical in nature. Unlike the black hat community which is based on much more external factors, hence the name “black hat”, the modern community hates that they don’t support Israel, college attendance or mixing of the sexes. They claim that these factors have caused the dwindling attendance at the Israeli Day Parade, a rise in the amount of late night tzedaka solicitations and the shidduch crisis.  While the black hat community merely stares at you or lowers your shidduch market value when not wearing their uniform, they don’t necessarily hate you, they just think you aren’t as frum as them.

According to Rabbi Feferkorn, one of the most anti-modern orthodox Rabbis we could find, “the modern community appears to be lovers of all people – but in the end they harbor these feelings and only bring them up around other men in kipah srugas and women in pants.” They would never say such things in public, they have to keep up their fake political correctness.

Modern orthodox community leaders have yet to deny the veracity of this survey, but many in the MO community have said that the survey was focused on areas in which the populations do no mixing at all and therefore people are more likely to be afraid of what they don’t know.