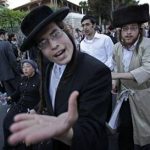 In a shocking new study, researchers have found that Haredi men tend to be in better shape than Modern Orthodox men. The study which was done over the past three years in Israel came to these conclusions last week as scientists at Tel Aviv University compiled data from the study. Many Haredim are shocked and thrilled at the findings, which they assumed would be exactly reverse.

The researchers studied over 1100 men to come up with the results and early on it was very evident that they were on to something. Haredim are typically criticized for being overweight and out of shape, and we have decided that these ideas were made up by the left wing secular media. Haredim tend to eat less than their modern orthodox counterparts and they do more exercise, although they added that the exercise was a bit different then they were used to.

The typical modern orthodox male in Israel works a full time job and watches television when he gets home from work. They tend to eat out quite often and they own about 3 times as many cars as Haredi men making them less likely to walk places. Haredim on the other hand, tend to study all day which requires unlimited amounts of energy. We found that thump dipping, shuckeling, swaying and dreying a kop takes a lot out of these men which are in better shape just from their learning practices. Add to this the fact that they tend to walk most places while carrying shopping bags and are slowed down by their large coats and hats, which also help Haredi men lose extra fluids because they tend to sweat a lot more than everyone else.

Due to the lack of reliable kosher agencies in Israel and a general lack of money Haredi men tend to eat out less and opt for meals cooked by their wives, which tend to be in great shape as well mostly due to their inability to drive and their pushing 3 strollers up steep hills.

Other factors mentioned in the study included the fact that the Haredi rioting may have caused significant weight loss because the riots took place in areas with no available food. The intense drought of recent years may have caused Haredi men to walk outside more than normal during the winters.