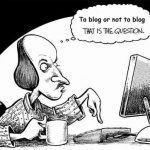 I get asked pretty frequently to recommend blogs for people to read or which blogs I choose to read. Within the Jewish Blogging World AKA Jewish Blogsphere, there are thousands of blogs, many of them worthwhile reads. Unfortunately time does not allow for daily reads. I have several daily reads and all of them lie within the following list. I was originally going to do a guide to the Jewish Blogsphere, the task proved too great, then I figured I should just make a post more devoted to the blogs and news sites that I read to stay up on my Jewish current events.

Every one of the blogs featured in this list is of importance to someone following what’s happening in the Jewish world – most of these sites are not personal blogs, and generally speaking I don’t read many personal blogs, save for a few of the shidduch blogs for ideas and the latest trends.I do plan on doing several guides to Jewish blogs, split up by categories, in the near future. For now, the following list is what I think Jewish bloggers trying to stay on their game should try to read frequently.

This list is not in any particular order and reflects what I think is important:

Jewlicious: Supporting Israel through cool arty and video stuff – they also do some kick ass festivals

Jewschool: Sure they didn’t let me write for them because I offended some women Rabbis, but that doesn’t negate the fact it’s a good and important read.

What War Zone?: Finally someone that thinks the middle east is funny!

Jew and the Carrot: Jewish site devoted to food and environment amongst other randomness.

Bintel Blog: The Forward Blog – do I really need to tell you why Jews should read the Forvetz?

Tablet: Your one stop shop for Jewish arts and culture.

The Jewish Channel: Imagine if you could get your Jewish news for the week in a professionally filmed news broadcast.

Mixed Multitudes: The blog of My Jewish Learning, don ‘t let Jewish and learning scare you away, they aren’t trying to get you to drink the punch.

Failed Messiah: One of the few Jewish Bloggers that made it – a real investigative journalist that pisses orthodox Jews off because he’s usually right, and how many Jewish bloggers can boast that they break stories to major news outlets.

eJewish Philanthropy: Anyone who runs a non-profit or works in the world of non-profits must read this blog.

The Kvetcher: Kvetching about orthodoxy and other matters in a well written and interesting format.

Wolfish Musings: The absurdities of orthodoxy and more – written by someone who is orthodox.

Cross Currents: Orthodox Jewish Rabbis and writers on today’s issues – place a finger on the pulse of orthodoxy.

The Muquata: Being a right wing pro-Israel blog can be fun too

News sites I glance at frequently:

The Jewish Star: one of the only really good religious newspapers

JTA: the only Jewish news wire

Vos Iz Neias: I check this site the most by far, read the comments, they will make you cringe.

Mashable: Where the social media world gets its news

204 comments for “25 Jewish Blogs you should read daily”