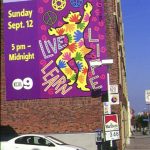 There I said it, and I think the hate is crap, so they believe the rebbe is moshiach and they have the cult thing going on. I am pretty sure that if other Chassidic groups had as much public attention and allowed outsiders to come in, they would also receive as much flack. Put the messianic stuff aside and you have what is possible the single most important and influential group of Jews that has existed in ages.

For all the hating that goes down with chabad, people love to use them. Everyone has mooched, stayed at or had something to do with chabad when they were stuck. Countless people break down in the middle of nowhere, can’t find kosher food, a place to daven or stay for shabbos and who comes to the rescue? Then you have the college campus phenomena which Wolfson/Aish enterprises is just starting to realize is a good thing, it seems like it took the snags 40 years to figure out that kids on campus were thirsting for some sort of torah Judaism.

Chabad is so accessible that it’s easy to hate them, it’s also easy to hate em because they speak English and therefore we can get the other foot in the door and comprehend what is flying. Other Chassidic sects are just lumped together as Haredim and no one really knows much about them. Ask almost any Jew regardless of their affiliation and they would recognize the Rebbe, I doubt they could pick any other big Rabbi out of a lineup. I sure as hell don’t know what the Satmar Rebbe looks like.

To me it’s pretty obvious that the Jewish world is jealous of chabad. In general chabadnicks are the coolest of the frum Jews and they invite coolness. Just look at the folks becoming frum through chabad, sure they go through their crazy BT stage just like anyone else, but unlike other groups, chabad doesn’t discourage artistic or intellectual pursuits – hence many chabadnicks go to college and live within both the secular and frum worlds – to me they are modern orthodox Chassidim, so hard to find in a world of frummies that want to make everything assur.

Might I add that no other frum group has the balls or connections to pull off something like the chabad telethon.