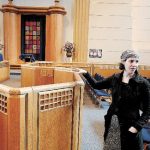 It has been learned that the recent uproar within orthodoxy over Rabbi Avi Weiss’s decision to make the world’s first orthodox woman rabbi has no halachic basis whatsoever. Speaking on anonymity, a very knowledgeable and learned rabbi from Monsey told FS- News in an interview that he didn’t agree with Rabbi Weiss, but that his disagreements weren’t rooted in Jewish law, they were rooted in his refusal to acknowledge that any woman could do a man’s job. Here are some excerpts from the interview.

You mean to tell me that you believe in the glass ceiling?

I don’t believe in any type of ceiling, I firmly believe that Jewish women have roles and those roles have more to do with mimicking zomicks challah rolls, than they have to do with reaching this so called glass ceiling.

So women shouldn’t be working?

I didn’t say that, I just don’t think they should be doing a mans job. This doesn’t only apply to becoming Rabbis, I wouldn’t trust a women to mow my lawn or purchase my chometz, those are mans jobs and she should stick to professions geared more towards women.

Don’t you find it kind of weird that women are told they have their own roles until it’s time to support their family – then they go against thousands of years of tradition by going out becoming the breadwinner. Isn’t this odd?

No, a man has to sit and learn, if the parents don’t have the money, the wife has to work.

So technically a woman could become a rabbi, it’s just that orthodox Jews don’t trust their mental capacity for such a hard job?

That’s correct, I don’t see any basis in halacha against a woman being a rabbi, assuming she were dressed tzniusdik, covered her hair fully, didn’t wear red or denim and stayed on her side of the mechitza. However, I don’t think women could handle the rigors of proposing bans, paskining on which products you could use with a triangle-K and off the cuff emergencies like telling the congregants that there was no minyan even though there are 15 men in shul – on second thought – how would she see if there was a minyan if she was on one side of the mechitza, assuming the mechitza was kosher.

So if it’s allowed, why did the moetzes hagedolim and RCA put forth this proclamation that Avi Weiss had veered away from orthodoxy?

Did you notice that both proclamations contained no halachic sources whatsoever? I myself have noticed this with regards to many of these “rulings” that come from gedolim. They all say some big news, but what people don’t notice is that they contain no sources or halachic information as to where these rulings came from. You must understand that most of these proclamations have to do with money and power, rarely do they have halachic basis.

I thought the halachic basis was tznius issues?

Well you could make anything into a tznius issue and they do, it’s an easy way out. Think about it, doing things in the name of tznius forces women to be at the mercy of the men. Men can’t keep their eyes off women so the women suffer – in this case, the tznius issues aren’t relevant because she is modern orthodox and the laws of tznius do not apply.

Wouldn’t it be more tznius for women to ask another woman their personal questions?

That’s actually a very good point that I discussed with my 11th grade class. We were discussing different ways to be dan l’kaf z’chus and this was brought up by a rather open minded boy, and no one had any arguments besides just denouncing such a blasphemous decision as wrong.

Do you think that Sara Hurwitz was frum?

Really, can you explain?

She doesn’t fully cover hair, uncovered hair of married women is considered ervah, with the amount of hair she shows, it’s akin to showing cleavage. She also davens in a shul without a kosher mechitza, according to pictures I have seen. I also heard her husband doesn’t wear a hat to shul.

Why do you think the Gedolim dealt with Avi Weiss so harshly, but when it came to Leib Tropper they were silent?

Avi Weiss threatened the age old philosophy that women are lesser creatures than men. The Torah needs to be upheld as a living document, even though it was written three thousand years ago. I can’t imagine how the rabbis felt after the emancipation proclamation which went against many mitzvos within the torah pertaining to slaves – now imagine what would happen if one of our own (for the record I don’t think Avi Weiss is orthodox – but many modern orthodox people do and that makes him even more dangerous) would come around and throw the entire torah back in our faces. The torah was written by men for men, we had to give something to the women, so we told them they have roles and that has been and will always be the status quo.

Avi Weiss has threatened our entire way of life. Can you imagine what would happen if the roles were changed around. Girls would go to beis medrish and guys would go and get jobs, it’s despicable. Who is this Leib Tropper character you talk about, I’ve never heard of him?

You don’t know who Leib Tropper is?

Isn’t he the kidney rabbi?

So… the rabbis really did keep Tropper under the radar. Leib Tropper is that guy in Monsey that forced a women he was converting to have a tryst with him and his wife.

The rest of the interview will be published shortly.