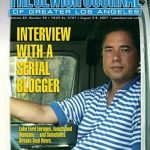 I wish I would have known the interview was going to be live, the second I arrived at Luke Fords “house”, really a converted garage with no kitchen, he sat me down and adjusted his camera equipment and told me it would be streamed live with the ability for people to ask questions (don’t worry the next time I’m in LA I may do it again) I didn’t realize how long the interview was until I saw the links from Luke Ford – there are 14 you tube videos that are 10 minutes long a piece.

I am positive I said things that may have been stupid, that’s what happens when you’re sitting in a relaxed environment and being asked questions, some very random, for several hours. I watched some of the clips and I do say some funny stuff – but I doubt many of you are big enough fans to actually sit through the whole thing.

23 comments for “Luke Ford – most hated Jewish blogger – interviews me”