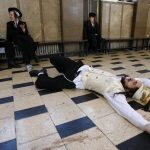 There were endless bottles of wine at the table and a keg of beer in the kitchen, red cups filled with beer were passed around, but nobody seemed to want any. I was at a college purim seuda and no one was drunk, I could have sworn it was a different planet, what kind of college students don’t get hammered when offered free alcohol from a rabbi dressed like Thomas Jefferson wielding an Iphone?

The sobriety of the meal goers really got me, I wondered if they had been reading all of the bans issues by famous gedolim in the past few weeks saying that getting inebriated on purim wasn’t a mitzvah and calling for the banning of alcohol. Maybe they were from modern orthodox families, the type that have been anti-drinking on purim since before the charedim even thought of such a thing. The conversation centered about mathematical philosophy and talking about different types research and at that moment I was snapped back into reality, I wasn’t in a yeshiva dorm dodging puddles of puke while people sang mishenichnas adar at the top of their lungs, I was sitting with a bunch of scientist/nerds from Stanford university and I knew that there would be no drunken madness to be seen – I longed for yeshiva and the purim madness that went on.

I was never much of a drinker, in fact I only really like dry red wine and good beer, and even then one glass is good for me. I am one of those types that drinks grape juice or joyvin for the pesach seder, but this fact has never gotten in the way of my fun. In fact, I am kind of nuts anyway and people at weddings or purim events always think I am drunk or stoned and this was the case when it came to purim at yeshiva.

For anyone that has never experienced a real yeshiva purim, you are missing out on one of the reasons to attend yeshiva in the first place, besides for getting fined for missing shachris and being suspended for going to the movies, purim at yeshiva is one of those memorable events that someone should definitely attend. It is somewhat inexplicable what actually goes on – but I csan give over some of my memories.

Purim is so much fun that most yeshivas don’t allow high school guys to attend, unless you’re an in towner, or someone special like myself, you’re usually out of luck. The first time I spent purim in yeshiva I was 17 and had to overcome my aversion to puking real fast, it actually seemed that people spent more time puking than partying unless puking was part of the partying – I am not quite sure.

Unlike most parties I have been to since yeshiva, the main event is during purim afternoon, when the shpiels, gramans and dancing goes on, of course that doesn’t mean people don’t have fun on purim night. In our yeshiva, purim night was for collecting.

What is collecting? I will attempt to explain this for the non-yeshivish folks in the audience. Collecting is when yeshiva guys go out to different families, usually on a list they have, they are usually drinking in the car and when they get to your house via designated driver (me) they come in and dance with you in your living room, the hosts usually offer booze and food as well. Then the host is supposed to cough up some money for the collectors cause – usually the yeshiva or in our case Lev La’achim. Purim Collecting is one of those things that gets bashed every year, because the collectors usually rent a limo, drink loads and end up lying around in their own puke all in the name of tzedaka. I am not sure why our yeshiva did it at night, but many folks end up collecting in the middle of the afternoon so they can hit up purim meals and get more money from drunk guests.

The interesting thing about collecting in our yeshiva was that most of the Rochester community isn’t too fond of the yeshiva, but still it was the one time a year that we would enter their homes and they would fork out money (only because we were collecting for another organization) I remember going into some peoples houses and it felt so awkward when only women were there – what do you do? Do you dance in your own circle? What if they want to join in? Screw it were drunk anyway!

People who go collecting tend to share battle tales for months to come and brag about how drunk they got and how much money they made. They also like to brag about their limo experience and other yeshiva guy prowess.

I don’t remember much about shalach manos giving except that to fulfill the mitzvah I usually gave someone something from the vending machine and demanded they give it back to fulfill their mitzvah too. I do remember strategizing and giving shalach manos to the folks I knew would give me back a good one in return for my crappy one, kind of like cain and abel, but I didn’t get struck down for my peace offering, I traded for better value.

The meal at yeshiva was always good, I say that in relative terms to the rest of the year. They always had rough beef with farfel and some sort of potatoes or something of the sort. They were addicted to serving flieshig mushroom barley soup which was a holiday tradition at yeshiva. Everyone had their own booze device, there was this sports addict Ruck that wore a Jets hat that had cup holders and straws coming down from it, a few people would fill their camelbacks with booze and drink from their backpacks.

Someone always made a food of themselves in front of the women, there was no mechitza, but in general the men and women were separated – as is the tradition with yeshivas the women merely watch, talk about the sheitle market fluctuations and wonder what it would be like to have fun on purim instead of watching. Someone always had a stupid remark to one of the wives, I didn’t realize it then but all of the women were mad young, I just assumed you had to be a certain age if you had kids, but some of them were my age.

There was always a band, the bassist always dressed as Slash and the dancing resembled a bunch of drunkards trying to walk the line. The shpiels were always funny and while they were full of inside jokes, I am sure that most people would have understood most of it.

See I told you it’s hard to explain, I really don’t think anyone could truly understand the hilarity and ridiculousness of yeshiva purim unless they experience it for themselves. Oh and can anyone explain why those white nanach yarmulkes are so popular with the yeshivish crowd on purim?