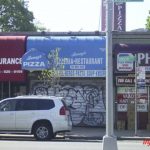 It looks like the kosher pizza shop will soon be a thing of the past, according to a recent poll of 100 New York area kosher pizza shops, which reveals that 74% are selling more sushi than pizza and have plans for a drastic reduction in their pizza offerings. According to the poll, many of the pizza store owners have been reluctant to face the facts, they are trying to hold on to their heritage but simply cannot.

Kosher pizza was brought to this country by Sephardic Jews, who had a long held tradition of quick and easy foods that tasted good. This is one of the reasons why sushi eventually found its way into pizza shops. But this caused problems for the Sephardic Kosher Pizza Racket, Sephardim fought this trend tooth and nail, they kept the sushi counters smaller than the pizza counters and forced customers to wait on long lines while one Asian looking Hispanic man rolled out sushi.

Sephardim and Israelis run the kosher pizza industry, but that doesn’t mean all ashkenazim are out. Studies show that pizza stores containing sushi and salad bars are 3 times as likely to be owned by Ashkenazim and are generating a larger profit. In the early 80’s after the rise in immigration from countries like Iran, Sephardic pizza store owners supplemented their income with borekas, Rabbi Mansour Torah tapes and spare hookah parts – but the demise of the car tape deck, rise in cost of filo dough and crackdown on ritual use of hashish amongst Sephardic Jews has left many pizza shop owners wondering how they could keep their pizza shops distinctly Sephardic, without succumbing to the Ashkenazi infiltration of sushi and salad.

“Old pushka boxes with 20 year old layers of oregano, and burnt week-old borekas just won’t cut it anymore.” According to Yitzy Feigenbaum of the Sushi and Pizza Alliance. “Frum customers want more from their pizza shops. They want sushi, they want their mango salad and they want their smoothies – but, the more traditional factions of our community don’t want to change and that will lead to their downfall.”

The Sephardic Kosher Pizza Racket spokesperson told us that they will continue to pursue ways to fight against the sushi trend. “You go to a pizza store for pizza, you go to an Asian restaurant for sushi.” He told us as he ate kibbe and Morrocan cigar pizza, a special he created himself to join together the traditional milchig and fleishig foods of Sephardic culture.

We will prevail in our cause for pizza-only shops, and if we don’t, we can always go into electronics.

← First there was fat camp, then there was shidduch camp
Unpious Blog: Chassidic Rebels with a cause →