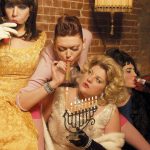 They say that shiksas are for practice but if you really think about it, Modern Orthodox Girls are for practice, at least they are when you enter the world of folks who think that marrying a girl frummer than them will make them more frum – it doesn’t work – in fact it usually backfires as in the case of at least 3 people I know who have gotten divorced because their wives were more religious than they were.

I am definitely not alone when I say that modern orthodox girls are for practice, countless folks from the “got a hat for their bar mitzvah – but haven’t worn it since” crowd, hook up with modern girls. Go hit up any Jew party and chances are you will find a bunch of ex-yeshiva, wavering between frumkeit and narashkeit folks on the prowl for modern girls, but ask them who they want to marry, and most of the time they say someone who I on that cusp of modern orthodoxy and yeshivish.

That cusp is a post in itself, because there are so many folks that would never want to walk around with the badge of modern orthodox, but in no way do they resemble someone who is yeshivish. There is even a facebook club devoted to the subject, but let us not waver from the subject matter here.

I know some of you may see it as a double standard, that guys want a frummer girl to marry, but they are saying this while they are in the process of getting it on with more modern girls. I may be mistaken, but modern girls probably put out more than yeshivish one’s, I know I’m making assumptions, but isn’t it true that all girls that wear pants and don’t plan on covering their hair after they get married are whores? Well that what was I learned in yeshiva, and luckily I don’t really believe that – even though they tried to ram that point home hard – no pun intended.

← Tattoos are kosher
First there was fat camp, then there was shidduch camp →

88 comments for “Modern orthodox girls are for practice”