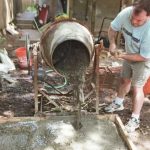 After several incidents of broken teeth, Telshe Yeshiva has decided to recall this years Free Charoses package. Telshe Yeshiva charoses is famous for looking and feeling like cement, the way it’s supposed to be according to our correspondent in Cleveland and many people joke about the fact that they probably use cement with the thought that most people appreciate the gesture, make a donation and throw the charoses out – unfortunately these assumptions were wrong and now Telshe has a massive lawsuit on their hands.

It all started when Barbara Hollander of Iowa City received this years Passover Haroset package from Telshe Yeshiva, she never really used the wooden spoon and feather, but always enjoyed the hard apple concoction that came with the package and would eat it with some matzo that her local grocery store sold. “I knew something was wrong when I bit into it and couldn’t chew, I have been eating Telshe Charoset for years and although it’s very tough to eat, I knew something wasn’t right when my tooth chipped.” Barbara’s husband Bill, took a hammer to it and realized with horror that they had sent her cement, against Barbara’s wishes he is demanding their donation be returned.

FS – News has learned that the biggest moneymaker for Telshe is their Charoset campaign and any bad press could be terribly damaging. In a typical year, over 100,000 Charoset batches are sent out, with those winding up at orthodox homes being thrown out. Yossi Rosen of Chicago told us that it’s a running joke in the yeshiva crowd that Telshe Charoses is just colored cement, but he was shocked at the news of a recall. “I can’t imagine a yeshiva paying you send an item back, I bet you they are going to charge for shipping and try to recover their costs that way.”

When we asked sources in the fundraising industry as to what Telse could to recover from such a big blow, they told us it looked bleak. Chabad has the market cornered and any step onto their turf has been known to turn ugly and we can’t imagine Telshe has any plans to offer birthright trips to Israel, unless they find a way to corner the gay yeshivish market.

← Too much tolerance seems to make people intolerant
Is LA considered “out of town”? →