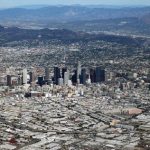 My newly created friend from LA a Rabbi comedian by the name of Rabbs, is convinced that Jews in Los Angeles deserve out of town status. After a week spent in LA I didn’t need much convincing. The Jews of LA don’t have an attitude close to anywhere on the east coast and they think and act in a completely different way.

I noticed that Jews from the LA area do not demand your last name upon introduction, aren’t hung up on Jewish geography, give firm hand shakes and look you in the eye when in conversation. They are friendlier, nicer and are super proud and knowledgable of their city – but not in that boasting way that New Yorkers do it. One of my main pet peeves about people in the west is that they are too nice to be real and up front with you the way New Yorkers and people from the east coast are, but people in LA have the ability to do this and I was kind of shocked at how good it feels for someone to be blunt with you.

Now I am sure some of you are wondering about this out of town thing, it seems a bit geocentric to call everyone that lives some place other than the east coast “out of town”, but that’s precisely what it is. The term “out of town” is used mostly by the black hat community to describe people from outside the New York area, but it goes deeper than that.

What on earth is out of town? In recent years, the term out of town has begun to be used by more modern folks, but originally it was used for shidduchim to describe someone that was a bit more open minded and modern – implying that folks who lived beyond the hustle and bustle of New York weren’t as frum or as closed minded as New Yorkers. The problem is that the term has been used in recent years beyond that of its original use to describe location. Now the term has been hijacked to describe folks that are open minded – by saying someone has an “out of town mentality”.

I have heard people describe folks who live in Far Rockaway as out of town types, which means the term really has no worth anymore. In my mind, out of town is reserved for folks that you can tell right away are not from New York metro area. In my mind “In Town” is the entire Tri-State area.

One of the problems with giving Jews from LA out of town status is that they could easily adopt the New York mentality. So while in LA they are nice and friendly, once they get suckered into moving to the east in order to get married, they tend to adopt the east coast way of life.