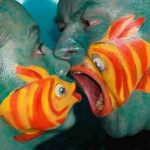 It’s been a long time since the Rabbis banned a food product, it seems they have been quite busy this year with scandals that they forgot to ban anything. The last couple of years have been filled with so many bans, it’s hard to believe that they could find something else to ban, but yet again, the Rabbis are trying to prove that they can assert power over the Jewish diet and way of life with their latest ban – Fish.

According to the Jewish Star article, one of the rabbi Karp of Modiin is seeking to ban Salmon and other fish due to round worms. This may hurt Jewish traditions like salmon with dill sauce, sushi and gefilte fish.  I sure hope they don’t “find” bugs or worms in meat – I am not ready to give it up.

Possible reasons for the banning of fish other than these round worms:

I wonder if this has anything to do with Omega-3 becoming so popular that the Rabbonom don’t want us to get too close to the goyim.

Is it possible that the rise in fish eating amongst frum Jews has made them healthier and therefore more attractive and less likely to pay attention to tznius?

Salmon is pink and you know what else is pink – so untznius.

Maybe they want to ring in all the vegetarians, because they aren’t really keeping shabbos if they don’t eat meat.

Is it possible that these Rabbis are heavily vested in fish farms and are trying to ban wild fish to make their shares go up.

I think this Karp wants to be really ironic – maybe he’s a hipster.

Just another way to control their subjects.

Maybe Karo doesn’t like his wife’s gefilte fish and this is the only way he can get out of it without embarrassing her.

Something smells fishy will have to be changed.