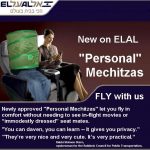 Last week there was some news about a company in Israel marketing personal mechitzas for Charedim traveling on planes that don’t want to watch movies or wrestle with some immodestly dressed seat mate for the arm rest and I think it’s absurd, and kind of funny actually. It kind of reminds me of the weddings I have been to with mixed seating/dancing that have a cluster of tables surrounded by a mechitza, so God forbid those people won’t look at mixed dancing. I always wondered how they could justify eating the food at such a pritzusdicke event.

I guess I always figured these charedim to be on such lofty levels that if a move cam on they would be able to avert their eyes and do other things. Besides, don’t most planes have personal screens anyway, and if that were the case they could just shut them off – or is the desire to see movies on a plane that strong. Or maybe they will be tempted by all of the half asleep ladies wearing sweatpants. Or are they tempted by the untznius ladies modeling medicine balls in the sky mall magazines?

Dare I say that I think personal mechitzas are a chillul hashem, aren’t we Jews not supposed to draw attention to ourselves for stupid reasons. I have even heard arguments for tucking your tzitzis in when people may just look at you and wondering why tampon strings are coming out of your shirt.

You will also notice in the picture that it appears to be an over-glorified plastic bag that probably allows for breathing – but how on earth will one be able to thumb dip while they learn, learn bechavrusa or throw bleach onto women wearing red? I am also wondering if they will make smaller sizes so the children can use them too?

There is no beter way to draw attention to yourself and make it very awkward for those trying to get out of your aisle or wrestle you for your armrest, than throw up a wall. I think it’s completely insane and just another reason for the mass public to hate the Jews.

← Go for the Ger
There is no Such Thing as a Free Lunch-But Birthright Israel will give you 10! →