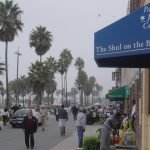 Typically when you walk out of shul for a break, you find the bulletin board and check if there’s a hot Kiddush, look through the door of the women’s section, check out the hot new designs and technology in the stroller lot or search out some tattered Chassidic stories books in the library before going back in. When I walked out of shul in Venice, California, I looked to the left and saw a bunch of mannequins modeling two piece bikinis to blaring techno music, I looked right and saw a drug rehab center and looking toward the beach I saw a healer sitting under his umbrella. All this was before looking at the beautiful tanned women walking with their short shorts and over sized sunglasses, the guys on their longboards and some of the strangest looking people I have seen, including a Hispanic man who wore Puerto Rican flag underwear, roller skates and nothing else. I wondered what it would be like for some chabad bochrim doing mivtzayon on the beach if he happen to say he hadn’t put on tefillin yet that day.

During kabalos shabbos, I walked outside, mostly because there isn’t anywhere else to go, and to my surprise the sky was lit up in a brilliant sunset that only the good lord could have provided. I had almost forgot that I was davening in the shul on the beach, literally on the beach and literally stuck in the second largest tourist location in Los Angeles, second only to Disney Land. Walk 20 feet out of shul and you are in the sand, another 100 feet and you can go swimming while they are doing the haftorah. Talk about a pre-shachris mikvah run.

With all the crazy folks living and hanging out in Venice, you would think the shul would be one of those new Jew situations, with a bunch of progressive hippie types, but it’s shockingly main stream. They didn’t even bring the torah into the women’s section for them to kiss and there are many republicans that daven there – I didn’t even know you were allowed to be right wing on the left coast, I figured all the right wingers lived in a colony somewhere and since I don’t vote along party lines, I was allowed to stay.

They barely got a minyan on Friday night, and the guy who davened sounded like he was straight out of Brooklyn. I should also mention that he was from Crown heights, wore a black shirt with a bunch of gold chains and rings and had a marijuana leaf necklace on – weird indeed. Shabbos day was a completely different story. The shul was packed but none of these hippie types had made an appearance. In fact, the crowd was much older than I had anticipated. Most of the crowd was graying, although everyone was in good shape and I doubt anyone was over 60. Everyone was super friendly, and I got an aliyah – I just hope they weren’t expecting a donation. Contrary to beach culture, I was one of the few not wearing a suit jacket.

Shul had never been so fun. Seriously, walk outside in the middle of laining and you can see plenty of nut jobs to float your boat. The Hare Krishnas were out in full force, as were the folks trying to get you into their medical marijuana places advertising that the doctor was in and he would make sure to find something wrong with you so you could get that marijuana pesto or peanut butter. Invariably, something bizarre will occur. If you stand outside for longer than 2 minutes, you will hear a Shabbat greeting from the most unexpected source. In my case, it was a large black man with an afro riding a bike saying “good yuntiff” How he knew that it was erev rosh chodesh, I will never know.

Like I said everyone was friendly, and I was shocked at the firmness of the handshakes, although one person shook my hand and in the process he moved away and almost took me hand. I think I may have been so happy because rather than read about letting my slaves free since Parshas Mishpatim starts the part of the torah that makes me want to cry and read pirkei avos the whole time, I found an amazing book about the Bostoner Rebbe written by Hanoch Teller in 1990, I say the date because I am sure the book was banned and if not it should be because it shows the Rebbe as compassionate toward non-Jews and in a picture with JFK with a little story about their meeting.

One of the ways I knew I wasn’t in New York was because at Kiddush no one pushed to get in, sure they conquered and all that was left were some stray onions from the creamed herring, but the table was square and well situated and one of the Kiddush engineers had smartly placed the drinks on a separate table, but unfortunately they had placed the herring as far away from the crackers as possible.

They had the best herring I have ever had, I hadn’t expected herring let alone good herring at some whacked out shul on a beach, but it was amazing. I was especially shocked and amazed to find jalapeno herring which was not too spicy but very tasty, the creamed herring was a little light for my taste, but the herring with red onions which could have been matzas or wine sauce was amazing. Even the crackers were poorly situated, the cracker choice was very good. They had at least 4 different choices and I was impressed at each one’s ability to compliment the herring choices.

I am told the herring came from shmaltzking and can be ordered online.

Besides for amazing herring and a general disinterest from the Kiddush goers in mowing me down for the last piece of herring, they had what I would term as the best mass produced Kiddush cake – entamins raspberry twist. They also had some good pineapple and cantaloupe. I didn’t check out the drinks table because I was too engrossed in the herring situation.

I find that everyone thinks their wife or mother is the best cook, is this the case outside of the frum community? I also find that most people are biased, not so big into food and have no idea what they are talking about – since most frum folks can’t really cook – they just know how to use sauce. As with most people, Rabbi Fink told me over the phone that him and his wife were foodies and that she could deliver – I honestly didn’t believe him – sure he could be a foodie but, that didn’t mean his wife could cook.

Some of you may have noticed that I haven’t talked about food in the last half a year like I used to and that is mostly due to the fact that I have been dating someone that worked as a sous chef for 2 famous restaurants and one of her former bosses is an Iron Chef winner. Either way, my standards have gone through the roof and I tend to eat much less of the food I once enjoyed so much.

The Rabbis wife definitely delivered, I was shocked at the goodness which was definitely unexpected since the starter was merely a simple fruitcup with some sort of parve yogurt affair reminiscent of those frummies trying to be fancy – it was good – but I began to wonder if she would really deliver. The next course was not eaten by me due to my dislike of raw celery, in fact the only 3 things I don’t like are hard boiled eggs, celery and cilantro. The raw celery was in a crab salad served with chop sticks, I really wanted the good stuff. I should mention that the whole wheat challah sweetened with agave nectar was very good and the fact she used agave could only mean one of two things, that one her parents was a BT or she was interested in healthy and organic foods.

The main meal was served buffet style and it was very pleasing to the eye and palate. Contrary to popular belief women can make cholent, but in yeshivish families I find that they rarely do – I am not accusing Rabbi Fink of being yeshivish, but he went to yeshiva and wears a black velvet yarmulke, although his wife wore red and they served strawberries that didn’t appear to be scrubbed with soap…

So back to the meal, the first thing I noticed was the orange fennel salad, sprinkled with dill and very good – I am impressed with anyone that uses fennel or fennel seed. Grilled pastrami salad with a sweet tangy dressing and marinated mushrooms. The highlight was definitely the wild blueberry and mango salad with a creamy dressing (no traditional mango and strawberry balsamic stuff here) the cholent was made by the wife and very good, and the kugel was of the type that falls apart and mixes well with the cholent. They also served corn flake encrusted chicken fingers with a sweet sauce, and blanched asparagus (my pee smelled all afternoon) with sautéed yellow peppers. The food was very good, colorful and luckily I didn’t stuff myself because for desert she served a mini cherry pie, covered with some sort of choclate sauce and ice cream – the pies were warm and melting the ice cream which made it so moist and messy and definitely sexual with the right person – I wondered if desert was for erev valentines day.