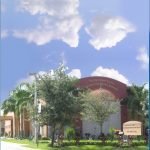 One of the things I hate about doing shabbos in random places is not being able to get to shul. So when I found out that Boynton Beach, Florida, where my girlfriend’s grandmother lives, had a Chabad I was pretty psyched. Sure I would rather a ‘regular’ shul, no offense to chabad, mostly because non-chabad shuls are usually more devoted to the local frum culture rather than the unaffiliated, but still any shul is good by me – especially if it offers some good material for me to write about.

Boynton Beach is like any other town in South Florida – endless flat concrete roads leading nowhere, random canals of brackish water and retirement communities with active golf courses- which is why I correctly assumed everyone in shul would be old. Right away I could tell this chabad was operating in the black, the building was huge and very fancy. Upon entering the shul the first thing you see is a huge portrait of the Rebbe. Upon closer inspection, I found the inscription of what is the backward way of saying Yechi – the expression “I will not die rather I will guide you” or something like that, basically told me these were undercover meshichists. I just hoped there wasn’t going to be any yellow flag waving going down.

The sanctuary was huge, and it was half full. I found the lone ashkenaz siddur and took a seat behind what I assumed to be the only people under 70 in the shul. The people who sat in front of me had that New York modern orthodox-yeshivish look. No one really wore a suit, but they had smallish black velvet yarmulkes of the yeshiva rebel variety with bobby pins holding them down (bobby pins are a big no no in the yeshivish world) and one guy was wearing those hocker glasses.

It seemed that everyone younger than aged 70 had a big role to play in the shul. As far as I could tell, there was not one chabadnick in the shul. In fact, from the way they all looked and davened, I would have never known it was a chabad shul if not for the tehilas Hashem siddurim that most people held. The davening was very yeshivish sounding and the people were mostly modern orthodox looking. This was shaping up to be one of the strangest chabad houses I had ever been to. I quickly glanced into the women’s section and besides for my GF, there were only two women wearing yarmulkes.

I took a walk around the shul and found a flyer for an upcoming scholar in residence. The scholar was a descendent of the Brisker Rav and he was going to be talking about the Brisker yeshiva and their way of learning. Sounded more yeshivish than lubavitch to me.

Believe it or not, it seemed like the shul hocker (the person who says good shabbos and has a conversation with all the cool people in the middle of shul) was a 14 year old kid, no joke. This kid would walk around to everyone and slap them on the back and ask them how they were doing. It was very interesting. He invited me to the Carlebach minyan they were having. He was the only person that said anything to me – no one said good shabbos – but I wasn’t really expecting anything since everyone in South Florida is actually originally from New York.

Unlike normal chabad houses, shachris started on time at 9am, I showed up at about 10am and the place was packed. The rabbi wasn’t there, but there were a bunch of chabad shaliachs in training and a few strange looking chabadnicks. These guys looked like yeshivish people that had gone chabad. I overheard one of them saying something about his journey into chabad. In the vein of “if you can’t beat ’em join ’em”, he probably figured that if it’s the only shul around you might as well embrace it.

Once again a majority of the shul was older folks. In fact, the shul was more like a country club. Almost everyone was having a conversation and no one seemed to mind. There were a whole slew of older folks wearing their talesim like a scarf and bright satin yarmulkes. I overheard two guys talking about their time in Chaim Berlin (they didn’t look like they went to Chaim Berlin). The outfit of choice was khaki pants and short sleeve button down or polo shirts. I was happy to be in sandals once again.

I was standing by the door when some guy came up to me to introduce himself and ask if I had plans for lunch. I told him I sort of had plans but that I could totally come since shul was ending so early. He seemed like a nice dude and I figured I might as well find out why 10 normal looking dudes would move to a place like Boynton Beach when they could have moved to Boca just down the road. If I were forced at gun point to live in South Florida (I think New Jersey may be more interesting) Boynton Beach seems like a good choice, close enough to Jewish establishments without the community bs that usually sucks you in.

The Kiddush really sucked, but I can’t complain. I have come to realize that chabad houses do not know how to make Kiddush cholent. Kiddush cholent and lunch cholent are two completely different animals. The nature of the kiddush cholent being produced in large quantity makes it harder to pull off and Lubavitchers make it smell very good but it never tastes good. I have had dozens of crappy chabad Kiddush cholents to know that the smell sucks you in but never delivers.

The cholent was burnt and not good, and everything else was kind of generic. But I haven’t really been into food so much lately, because my standards have gone way up for multiple reasons. One guy came up to me to say good shabbos and another got stuck saying good shabbos to me because he needed me to move out of the way so he could get to the herring. I really enjoy those awkward good shabbos maneuvers in which people say good shabbos so they can get rid of you for one reason or another.

So I went along with this guy for lunch, we chatted and he began introducing me to the other young folks of the shul making sure to tell everyone that I was from Berkeley, California – to which everyone responded that they knew someone in LA. I guess northern California is similar to Rochester. New Yorkers figure that if you live in Rochester, it must be near Westchester when it’s actually 350 miles away, just like LA and San Francisco being 400 miles apart, classic NY geocentric attitude.

Immediately upon walking in the house I realized I was in for a real lively and social situation which I like, none of that awkward sitting around and waiting for discussion to start. I was in San Francisco a couple weeks back at a table that continually went into awkward silences to my absolute delight. This was the exact opposite. I had entered the hub of Boynton Beachm where everyone came to drink, eat and schmooze. I was asked what I was drinking and took a beer just to be social. At this point I wondered if frum Jews who drank looked down upon those that didn’t. My father thinks I’m nuts for not enjoying bourbon or good Scotch and thinks that the true meaning of shabbos and yuntiff can’t be had until a nice glass of booze graces your hand. Besides for the pre-lunch Kiddush club, there was some amazing cholent with asparagus inside and some very good shalom zachor leftovers.

People kept shuffling in, and I was introduced to some very friendly and interesting folks, all of whom had good solid handshakes, something I never expect from frum Jews. The woman of the house, who looked not a day older than 30, asked me my birth date so she could check her book of birthdays and see if it was right. It was pretty spot on and the other dates I checked seemed spot on as well. Unlike other books, her encyclopedia of birthdays seemed different because you couldn’t just apply other days to yourself.

The kids were also very sociable and guess where the shul hocker lived? Yep, he was one of the kids of this family. In fact he had davened mussaf and he even had the balls to stop during repetition so people could quiet down a bit. Clearly, this kid is going to be super hocker when he gets older.

Toward the end of lunch I started talking about the blog after the guy next to me mentioned Vos Iz Neias and his wife mentioned that more and more divorces in the frum community are happening because one or both of the partners is cheating. Since I don’t really know of anyone that this happened to I kind of think it’s a good juicy rumor to start – like wife swapping running rampant in the five towns, but I told them both that this was the sort of thing I write about.

← You are invited to a Check-Out Linden, NJ Shabbaton
Letter to the editor: I am not Jewish but my boyfriend is orthodox →

20 comments for “I spent last Shabbos in Boynton Beach Florida”