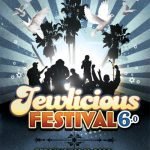 Reminder: I am performing tonight at the shul on the beach in Venice, California.

Since I am already living out in California I am able to attend, in fact I am performing for the first time on the west coast tonight in Venice @ Shul on the Beach – and it’s a FREE show. Anyway, Dave from Jewlicious, tells me that if you want to be a presenter you can go to the festival for free. Besides for the fact that tons of cool peeps will be there including Matisyahu and myself, there will be tons of guys and gals and maybe you can meet that special someone.

For anyone living in the Los Angeles area under the age of 36 you would be foolish not to attend Jewlicious Fest. Meals, concerts and panels are all included and you get to camp out with a bunch of very random people, and I can guarantee there will be some hotties there – it is southern California after all.

← Modesty is not about stockings, wigs or skirts
Niddah Rap →