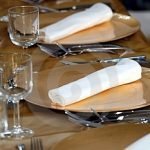 After three phones calls from a former rebbe asking me to attend my yeshiva dinner, I decided to go. I was in New York for a wedding that weekend, and figured I should at least make an appearance and decide on the spot whether it worth staying and paying. In the car, I decided that I owed enough ma?aser to justify the cost. The food at these dinners in itself is never enough to justify the cost. I also figured that they must be desperate this year, since I usually get, at most, one call from my former rebbe. Three calls was serious. And I had heard from other attendees pretty much the same thing.

For the unyeshivishness of my former yeshiva, the dinner always looks so yeshivish. I should note that it was the first time I realized that yeshiva dinners are the only black hat events in which there is mixed seating. It makes sense because I started to wonder about the logistics of separate seating. Would you leave your wife in the women’s section, someone who doesn?t know any of the women attending, and therefore no one talks to her because New Yorkers are too rude to strike up civil non-Jewish geography related conversation?

I did notice several very bored wives or fiances being dragged around by their husbands. I also noticed that much of the time, yeshivish men are terrible and awkward when it comes to introducing their significant other. I watched one conversation drag on and the wife was just standing there for several minutes until the guy he was talking to said something like ?and who might this be?? The response was a benign introduction but I wished he would have answered that it was his “pilegesh” while his wife was away.

I wish that yeshivas would just have reunions. But no, instead you have to get all dressed up and spend a bunch of money for a dinner. Now don?t get me started on Ad Journals, they deserve a big WTF. I mean, seriously ? the Ad Journal in my mind is a big waste of money and a rip off. There are exactly two points to the Ad Journal: reading material during during the award acceptance speeches, and to see who has the money and then mock them for what their ad content. The yeshiva Ad Journal this year had pages called ?Gold Trim”, though there was no actual gold trim to be found. The least they could do is put some actual gold on them.

My theory is that anyone who gets honored at a yeshiva dinner or otherwise has something to do with money. It is naive to think otherwise. I mean, the alumni of the year, the chesed award, parents of the year: clearly, they had some connections to a high powered organization which undoubtedly has money. Whenever the Parents of the Year get up and start talking about their child and how much he?s grown, I am always trying to figure out why he went to Rochester in the first place. Which school had he been he kicked out of? Which school rejected him afterward and at which point did they finally throw in the towel and decide to send him to Rochester? I remember whenever we would come back from an out shabbos there would be a new kid in yeshiva and the first question was, where did you get thrown out of, followed by an answer that usually went like ?where haven?t I been thrown out of?? Of course Rochester has changed over the years. The administration tried to transform it into a mainstream yeshiva ? but why would any mainstream yeshiva family want to send their kid to Rochester? I figured Alumni of the Year goes to whichever alumni can raise the most money or has rich parents. This became even more apparent when one year this kid got the award but he was still a student at the yeshiva, so he could hardly be called an alumus. It also always seems like someone who wins an award has something to do with Toronto, because somewhere along the line the yeshiva realized that Toronto kids were rich and off the derech, so if? tapping into that market was lucrative for the yeshiva.

The speeches this year, as per usual, were run of the mill. Then came a ?devar torah and then some sort of bracha for the yeshiva. I did notice that two of the divrei torah were about sex. I am probably the only only one to notice this, as I am very observational and always trying to point out the negative in everyone. It made me think how sex becomes kosher if you talk about it with torah, even though the torah discusses some pretty nasty sex scenes.

As expected I was one of the few people with a blue shirt, without a hat and wearing a knit yarmulke, but no hard feelings ? tis the way of the yeshiva world. I did notice one woman without a sheitle, but since she was older. It was a bit different then the one time a classmate of mine showed up with his wife who wasn?t covering her hair. It would have been fair to assum that she was wanted for murder with the amount of whispering and silent judging that was going on about her.

I was pretty impressed with how tzniusly dressed all the wives were. There was one very sexy girl, but just because someone is hot and sexy doesn?t mean they are untznius, she may have been the only ?hot chanie? of the night. I have an inkling that most wives go to events to see what kind of people their man went to high school with. The men probably bring their wives to either show them off, or as a crutch to escape from people they don?t want to talk to. It seems to me like many of the women are either dragged along or view it as an evening out, but it?s hard to differentiate beween the two.

What dinner analysis would be complete without the food? I have become a bit of a food snob, but they had your regular fare. The requisite carving station with a few meats, a fish station sans sushi but with caviar (which, it seems that no one besides me actually ate, likely bec there, disappointingly, were no crackers nearby).They had some lamb stew, a pasta station, a bar and some assorted smorgasbord favorites. But the food didn?t warrant any pornographic stream of consciousness descriptions.? Sorry for that.

← Where did the Cheap Jews stereotype come from?
Orthofox vs. Sheitel Hooker vs. Hot Chanie →