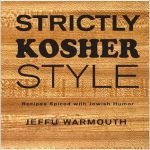 First there was kosher style, then there was Charedi style. Every time there is a scandal involving an orthodox Jew committing some crime everyone gets up in everyone’s grill about these people not really being orthodox and just being fakers. The conversations always degenerate into arguments over what really makes a Jew religious, is it the heart or the clothing?

Obviously it’s the heart or internals, like the liver that make a person a religious Jew. It has nothing to do with the color of your hat or the size of your yarmulke, but there needs to be a way to label these new school fakers. I know plenty of non-observant religious Jews and loads of observant irreligious Jews.

When I was in high school there was much talk about fakers, those kids that would be model yeshiva bochurs that happened to smoke on shabbos or be sleeping with girls during off shabbosim from Lakewood, but times are a changing, and the old labeling of fakers just doesn’t work anymore.

Young fakers are now considered kids at risk or bums, while adults of the same stature are treated with respect, as long as they are just stealing money or molesting little boys, if they were to smoke on shabbos it may become a problem. What are we supposed to call these folks that are in such blatant, albeit private ignorance of key Jewish laws? I have decided that these people could be called Charedi Style.

Charedi Style is similar to Kosher Style. Kosher Style is old world food, Jew food that isn’t necessarily kosher. Charedim that are exposed through scandal, like Tropper and the Kidney guys subscribe to Charedi Style Judaism, where they look and act Charedi, but aren’t necessarily religious. I know orthoprax may be easier – but they are still Charedi in my mind, they just aren’t subscribing to the torah.

25 comments for “Are you Charedi Style?”