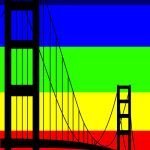 I have come to realize that the gay community at large is a curiosity to me. No, I am not gay nor do I have any interest in being gay, but just like the Chassidic community intrigues me so does the gay community. It may have something to do with the fact that I will never actually be a part of either community as a full fledged member, or the fact that their looks and practices hold some sort of mystique. Whatever it may be, San Francisco is very gay, in a good way.

I hopped off my bike to have a closer look at The Castro section of San Francisco and suddenly everything struck me as gay. Rainbow flags hanging from the lampposts fluttered in the gentle breeze as I walked my bike down Castro Street, and I immediately began staring at people. I felt like I was in Mea Shearim in Israel, where I would walk and just stare at all the people as if it were the first time I was seeing their type. In Castro, I did the same thing because everyone seemed to become super exotic and interesting.

A poster for an event called Battle of Bulges made me laugh out loud, as I read the fine print that stated you could win $100 for the biggest bulge. Then I passed a store called Hot Cookie, which had skimpy underwear with hot cookie printed on the flies. I passed by a restaurant called The Sausage Factory and wondered if my mind was making all of these things into innuendo, or the names were actually intentionally chosen because of the locale. I looked at the menu and I started laughing to myself as I read sausage and meatballs.

I saw a butch lesbian with a green Mohawk wearing a leather vest. I saw a man with a handlebar mustache holding hands with a guy in a kilt. I saw a skinny little guy who walked like a girl and I wondered if he ever had trouble maintaining that act, or was it even an act? I noticed a guy that could have been a chabad Rabbi, had he not been wearing baggy jeans and a t-shirt. I saw a lot of men with facial hair. Though,  wait, in retrospect, maybe they weren’t even males.

I noticed that most of the men walking around were manly men. Where were all the femmes? Maybe the femmes all were working in their white collar jobs, or maybe pink collar is what they call it in the gay community, and maybe all the “bears” (manly men) were roaming the Castro at 3 o’clock on a Monday afternoon. Where were all the stereotypical gay folk, the guys in tight jeans with nicely groomed hair and wing tipped shoes. Why did everyone have a mustache?

No one gave me a second glance and I began to think that I was not good looking enough for these men. Maybe they could tell I was straight — even though I was wearing a dirty yellow shirt and spandex pants. Then again, no one looked gay (whatever that means) but almost everyone looked bizarre and the lack of women on the street, as well as the nail salon being full of men, could have been a clue. But still this was San Francisco and everyone looks weird in SF.

← Jewish Ethics and the Internet: This Thursday at Twitter headquarters
Are you Charedi Style? →

37 comments for “San Francisco is gay”