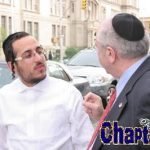 Until the recent press release from Rabbi Yehuda Levin announcing that the gays were the cause of the Haiti Earthquake, no one had heard of him or his organization the Rabbinical Alliance of America. In response to RAA and Agudath Israel getting all the media attention for announcing the reasons for the recent earthquake in Haiti, the Rabbinical Council of America, not to be outdone – put out the following list of reasons that they think caused the earthquake in Haiti and if you thought Avi Shafran or Yehuda Levins theories were shocking, you are in for a real shocker.

Other reasons that the Haiti Earthquake may have occurred:

Frum girls going to colleges other than Touro or Kingsborough

The framing of Leib Tropper

Women who secretly held onto their sheitles made from Indian hair

Men not wearing black hats of the right size and brand

NCSY and their coed kiruv conspiracy

The appointing of yoetzet halacha

People who acknowledge the state of Israel

Cashiers that don’t slam the change down on the counter

The Internet and Blogs

All of the actions of the following groups have been proved to directly cause earthquakes and other disasters including the 1906 fire in San Francisco, the destruction of Pompeii and the eruption of Mt. St Helens.

Modern orthodox – because they are posing as frum when they aren’t, don’t be fooled by their white shirts and black velvet – they are imposters

Open Orthodox – since when is orthodoxy open – that sounds oxymoron

Reform – it’s been known for years that they cause disasters

Egalitarian – women have only had rights for the last 80 years or so, the torah has been around for thousands of years, cease your equality or watch as fellow humans will die in horrible disasters.