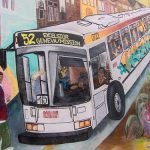 We walked in during pisukei d’zimra and there was already a large crowd of people gathered. I took a seat all the way to the right of the room and looked around. A few people said “Good Shabbos“, asked me if I was a cohen or levi and then left me alone to observe.

I was seated in the men’s section. A table with Birnbaum siddurim acted as the mechitza between me and a bunch of women and men sitting together. A woman davened for the amud and I couldn’t help but wonder if they had picked her because of her manly voice (In San Francisco you can never be sure). Let’s put it this way: if I wouldn’t have looked up or around I would have mistaken the minyan for a traditional orthodox one, but it most certainly wasn’t.

Farther to the left, past the mechitza and the group of women in talesim that looked like scarves with the men pretty much looking the same, was another table separating another section of just women – most of whom were wearing skirts and not wearing talesim.

The woman finished her prayers at the amud and a man in white shirt and black pants took the helm for baruch hu. As he let out his first words of shochane ad, I couldn’t help but hear his distinct chassidish accent. He shuckeled mildly and sang beautifully, but his suf’s and oy’s were very blatant. I watched as I wondered if anyone else knew that they had a full fledged tuna beigel in their midst.

Based on my keen observational skills, I could pick up on the few men and women who were brought up orthodox, or were orthodox knowledgeable. I could tell who knew what they were doing instantly based on when people stood up and sat down, and what pose they held during the prayers. The chazzan picked an obscure Carlebach tune for kel adon and everyone sang so beautifully. I was really kind of amazed since most of the other shuls I had visited in the Bay Area were really lacking in their choral abilities, i.e. they sounded more like dead cows than anything else.

While the chazzan sang beautifully, he also paid attention to speediness. He didn’t drag things on and we weren’t standing for ages during kedusha. I wondered what his story was; We were a long way from KJ or Skvere or from wherever else he may have hailed, yet he looked like he could be the model be used for a modern orthodox yeshiva advertisement.

The person leading most of the show looked like he was straight out of the Upper West Side singles scene: good looking, decently dressed and eyes wandering over the women across the tables. (Editor’s Note: Heshy has lost his mind if he thinks one of the defining characteristics of a stereotypical guy out of the UWS is “good looking”) The mechitza situation reminded me of frummy concerts where you can sit separately or with your family. In this case, everyone appeared to be in their 20s and 30s, but still couples seemed to sit together. I wondered if the tables were placed there on purpose to act as mechitzas or it just happened that way.

The women did pesicha and paraded the torah around the room so everyone could kiss it. They set it down and started giving aliyahs out like any regular shul, except that one of the “bimah hocker mistake catcher people” (coined term, copyright pending) was a woman. She was the nicest mistake catcher I’d ever seen. Whenever someone would make a mistake she would whisper the correction very nicely, a strong departure from the traditional way of publicly embarrassing someone who makes a mistake during laining. It was also my first time seeing so many people lain. Every aliyah seemed like it was a different lainer, the men took the first 3 and the last 2 aliyos with women take those in between. Apparently there are sources that say back in the day there weren’t even middle aliyos, so women laining and getting middle aliyos may not actually be a problem – whatever the case may be, it did seem that they were trying to keep things as close to within the parameters of halacha as possible.

The Mission Minyan is known as a partnership minyan. This means that in order for a minyan to be called, they required 10 men and 10 women to be present – which is cool because that means we actually had a minyan. I was wondering what I would have done if they had no halachic minyan but started doing minyan type of stuff — would the brachos be considered livatalas, or taking Gods name in vein? I also wondered how I felt about shaking women’s hands yasher koach – I try not to shake women’s hands unless I have to, because if I am going to break negiah, I might as well save it for the good stuff.

I declined hagba, so I didn’t have to have any awkward shomer negiah moments. I did get to watch in horror as I realized that I was watching a first time gelilah by a woman who was having a heck of time getting the torah cover on the torah. This did nothing to change my longstanding belief that geililah is one of the most embarrassing shul jobs – but not the worst, the worst is when you get stuck holding the first torah.

When announced on various social networks and my website that I was moving to the Bay Area, the first thing that my friends and dedicated readers told me was to check out the Mission Minyan, because I would like it and get some good fodder.

Their Friday night davening attracts many more people, but I enjoyed the Shabbos morning prayers because I got to see the regulars, those who founded and run the minyan and who make it possible. And it’s really different from anything I had ever seen.

I would even venture to say that the Mission Minyan can be categorized as ‘orthodox egalitarian’. The prayers are all in Hebrew, the service is distinctly orthodox and the people who daven for the amud know their stuff. The singing is great and there is no preaching or kiruv going on. The Mission Minyan founders have built a new Jewish community from the ground up. If you attend without meal plans, someone is sure to invite you over. Guests are pounced upon with a friendliness that should be an example for other shuls. There is no rabbi, but the folks that grease the gears make sure to be as welcoming as possible and that combats what is my main pet peeve with regards to going to new shuls as a guest.

While many right wing orthodox folk may scoff at the idea of the Mission Minyan being orthodox, I would challenge them to show me that any of the progressive practices are against halacha, rather than just against the norm. Although I myself can’t relate to women who want a part of rituals they are not commanded to do, I don’t see a problem with it. For the life of me, I can’t figure out why women who don’t keep the rest of the mitzvos seem to want to just do things that the men do – I could understand it if they did all their requirements and then figured out that they want to do extra. Maybe it’s good that women want to do extra, beyond what they are commanded to do – something kinda like a male wearing tzitzis at night.

In my mind, Progressive Orthodoxy or Post Orthodoxy as Gil Student calls it, is changing the image that orthodoxy has for many people. It is opening the hearts of people who would have never stepped foot in an orthodox establishment, so while the Mission Minyan is not orthodox per se, their orthodox style combined with more Egalitarian inclusiveness really brightened up my day, and opened my mind.

49 comments for “The Mission Minyan: If Orthodox and Egalitarian were possible”