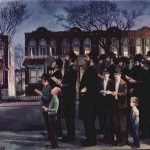 I wrote this post last night and just this morning I received word that a flight was diverted from New York to Philly because some kid decided to whip out his tefillin, and some folks thought it was a bomb. I would never daven with tefillin on a plane, unless there were other people doing it, I don’t want to be tackled by an air marshal. It’s not really unreasonable to think that many non-Jews and even Jews have no idea what we are doing when we are engaged in some sort of religious ritual.

One of my roommates during birthright thought that my tefillin were just straps to tie my arm in order to shoot up. This was a non-affiliated, albeit educated Jewish kid from Colorado who was in school at NYU, If someone who attended NY Jew and still not be informed about tefillin – imagine those passengers from Kentucky, I would have freaked out as well.

Kiddush Levana: A bunch of Jews are gathered on a street corner looking up at the moon.

What they think: Wow I didn’t know the Jews prayed to the moon God, I always thought they were monotheistic.

Lulav: People are walking down the street with lulavim on succos.

What they think: So this is when the Jews celebrate Palm Sunday, wait a second, it’s not even Sunday. Maybe they are doing it now because palm  branches cost less when out of season, cheap bastards.

Shabbos: It’s a frum community and everyone is going to shul.

What they think: Wow look at all these people wearing black, there must be a really big funereal going on somewhere. Wait, why is everyone walking to the funereal? They must be trying to save on gas, or maybe it’s a green funeral.

Burning of the chometz: There is a garbage can in the street and the Jews are gathered round throwing their chometz into the fire.

What they think: I wonder if this has something to do with commemorating kristelnacht? Are they burning German books or something?

Megilas Esther: Everyone is dressed up and it’s time to boo for Haman.

What they think: Why is everyone cheering every time they mention that man Haman?

Purim: Everyone is delivering gift baskets and most of the kids are dressed up.

What they think: Look the Jews have their own Halloween, but instead of waiting for people to ask for candy they go and deliver it.

Simchas Torah: In some places Jews take to the streets to celebrate the giving of the torah.

What they think: Look it’s an orthodox Jewish gay pride parade, but why are all the lesbians just watching?

← Interesting links for you
On Having Good “Breeding” →