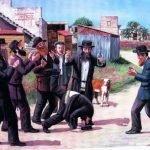 Just because we love to hate on Chassidim doesn’t mean there can’t be a little loving once in a while. It seems that most of the negativity many non-Chassidic orthodox Jews feel for Chassidim comes from the media itself and not from personal experience or contact. Sure they look different and their fervency makes many of us cringe but let’s face it, Chassidim are cool.

Chassidic Garb: I like to imagine what life would be like if I could wear the same thing every day, there are no seasons when it comes to Chassidim, they dress the same every day.

Shaved Heads: How cool is it to walk around and have everyone think you have a full head of hair under your turban, but guess what it’s shaved. Also makes for an interesting discussion that someone may overhear and think the ladies are talking about other “shaved” areas.

Turbans: Chassidic ladies come in close second to Sikhs when it comes to cool turbans, did I mention they allow for super fast power walking moves.

Rebbe’s: How I long for the day when I won’t have to think for myself, just listen to whatever the Rebbe says and publicly act like you agree – we all know about those folks who smuggle TV’s into their house in air conditioner boxes.

Rebbe’s Tish: Why do you think the number one yeshiva guy in Israel tourist event is the Rebbe’s Tish? Because seeing a bunch of Chassidim climbing up bleachers and fighting over blessed oranges is really entertaining.

Niggunim: Go to some big Chassidic gathering and listen to some Jewish Soul Music, this isn’t Lipa, this is real Chassidic music, check out how those Hassids sway.

Knickers: Those little boys with knickers are super cuties.

Bekishes: I have been thinking of getting one for years, think about the possibilities, you could wear a shirt and socks, but no pants. You could also fit a shotgun down there, unless you already have one growing out of you.

Riots: The good old days, when Chassidim used to set aside stones on shabbos so they could throw at people driving on shabbos to mekarev them are over. Haredi Riots and protests and all the rage nowadays, drawing curious onlookers like myself who have nothing better to do than dodge water cannons and rubber bullets on a motzoi shabbos between havdalah and melave malka.

Bracha’s: My father used to take us to the Skvere Rebbe in New Square to get brachos. I’m all for free blessings, but what made the event even more fun was my father telling us what the Chassidim were saying about us in Yiddish behind our backs.

Robes: If I were a woman I swear I would rock the robe the entire time, I may opt for deodorant, but I just dig being able to wear a shapeless outfit all the time. I can’t imagine being a girl and having to worry about people looking at my body parts all the time.

Yiddish: Besides for a few Yiddishists, older folks and that one woman in Taiwan there really isn’t anyone keeping Yiddish alive, and it’s a really cool and cultural language.

Lack of table manners: Everyone guy loves eating with their hands and fressing and so do Chassidim. Just load up on some cholent and shlishkis and you’re good to go – forget about asking for people to pass things, and using a knife.

Bullet Proof Stockings: One of the main reasons why Chassidic women who refuse to move to the back of the bus never really get hurt as the tznius police kick them in the shins.

Accents: Where else can you talk to Americans that were born and raised here that sound like they just came off the boat.

Chassidus: I never really had a chance to go beyond chabad, since there aren’t any Satmar or Bobov houses on campuses across the country, but I’m sure they have some cool stuff too. It’s kind of like happy mussar if you ask me.

Peyos: When it comes to hair styles orthodox Jews really don’t have any. Case in point – I was at my yeshiva dinner this past week and this old friend and I were talking and he mentioned when these dudes first came to yeshiva they were mamish like goyim because they had step haircuts. Well Peyos let you keep some remnants of your long hair or imagine what it’s like to have long hair.

Daily Mikvah: It’s not for me, but I can see the thrill in a bunch of guys skinny dipping every morning and slapping each other with towels, seems like the Jewish version of the public school locker room. Also reminds me off the JCC locker room, where old dudes love to walk around naked and talk about the snowbird habits.

19 comments for “Why I think chassidim are cool”