I was just interviewed on the blog Heeb ‘n Vegan. Michael Croland, who runs the site, managed to get a lot out of me in very little space — we talk about Muslim punk music, my novel Never Mind the Goldbergs, my vegetarianism — and, randomly, the last book I read, which is Jonathan Safran Foer’s Eating Animals:

It’s hard not to talk about the stories in the book. I’ve stopped multiple dinner conversations because something popped into my head, and I’m really bad about not saying something. Usually in a charming and offbeat and punky way. But, uh, you can’t really say this stuff charmingly.

Judaism isn’t really a religion of choices. In general, in Jewish law, there are no circumstances that get either/or verdicts. You’re either commanded to do something, or you’re commanded not to do it. Being a vegetarian falls into a kind of shady ground. Some people will tell you that Jews are required to eat meat on Shabbos or holidays. Others will say that eating meat is a condescension that God made to people after that whole Noah thing didn’t work out, and the world was full of people with unrealized hostility. (At least that’s sort of the way it’s portrayed in the Torah.) In essence, you can kind of say that Judaism supports either position — that we either have to eat meat, or that eating meat is one of the most base and degrading parts of being human that there is. 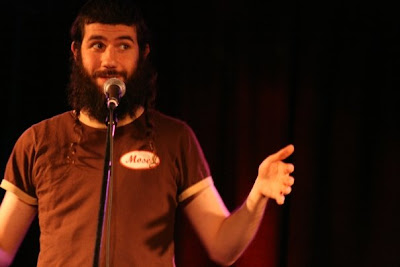 He also quoted a line from Goldbergs at me — which, I think, is the highest compliment you can get. It means that you’ve said something that’s affected someone else enough for them to remember it and process it into their brains, and possibly make it part of their thinking. And then he asked me if it was a blueprint for Jewish punk. (The line he quoted was:”I still believed in G-d. I just didn’t believe in other people. I mean, some days, I felt like G-d was the only one who believed back at me.”)

I don’t think anything can be a blueprint for Jewish punk, although it’s awesome that you asked. I think that punk is the idea of taking something in a wild new direction, innovating or mutating it, and I think that the essence of any new development/mutation/pwning in Jewish thought involves going back to the source — to G-d, to the Torah, to the original things that Moses said — and asking ourselves, what’s my relationship to it? And then looking at the relationship that other people and the Greater Jewish World have to those same ideas, and saying that maybe we’ve got to get back to the source.

DIY Judaism is the way that Judaism’s supposed to be. But I think it also means you have to look at the sources and really get to know them, much like food radicals need to read Diet for a New America or political radicals should learn Howard Zinn.

I definitely don’t think I’m at the point of Jonathan Safran Foer, where I can lay out a calm and rational blueprint of each of my beliefs in a wowing and awe-inspiring (although possibly hazardous to your dinner-party conversation) book-length tome — but I guess that’s all part of the discovery process. Whether it’s the food I eat or the God I pray to. Either way, as soon as I’ve got it lined up for sure, I’ll let you know.

← Black Hats are just like Kugel
When did healthcare become a right? →

98 comments for “Why I Don’t Eat Animals”