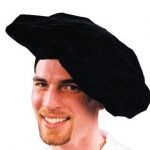 Guest Post By E. Fink
Post stolen from the Dov Bear Blog
Please don’t take this post too seriously. It’s partly written tongue in cheek. I bear no grudge against hat wearers. I myself was a devout hat wearer for many years and I may return to hat wearing sometime in the future. But then again, I’ve also waffled on kugel…

Black hats are just like kugel. Don’t you agree?

Kugel has been around for 800 years. It has evolved and ingredients and variations have been added. But it is all kugel. According to Wikipedia, Kugel is a Jewish word that describes a pudding or casserole made from noodles or potato. Kugel was a common food in eastern Europe and the Jewish housewives made it a staple of the Jewish diet.

Does kugel have any holiness attached to it? Is there any meaning behind kugel? No and no. Kugel is a social phenomena.

Jewish people eat kugel for the nostalgia. Kugel evokes the shtetl, a simpler time that has become romanticized within American Jewry.

Black hats are just the same. Jewish people wore hats of various shapes and colors for hundreds of years. It was part of the lifestyle of all European cultures to wear a hat. The hat was a basic part of the wardrobe of all Europeans, Jews and non-Jews alike. Up until JFK ascended to the presidency all US presidents wore their hats in public. JFK was a young whipper-snapper whose generation did not all wear hats. Slowly the rest of western culture followed JFK’s lead and the hat became an anachronism. No one wears hats anymore.

The fedora was standard issue for Europeans and Americans, Jews and non-Jews up until about 50 years ago. It was a style of dress that was appropriate for its time. Why do we cling to it today?

We cling to it like we cling to kugel. The black hat evokes the shtetl. There is a nostalgia associated with the black hat. It is a social phenomena.

So what’s wrong with that? Nothing if that is where it ended. But the black hat has come to mean more than that. It has become like the handshake of the Freemasons. It is an entry into the exclusive club of orthodox Judaism. Shouldn’t the entry into the club have more meaning than kugel? Wouldn’t we be better off if entry was shmiras hamitzvos?

There are other problems. There is the idea that Jews are like Amish folks. We don’t move on, we don’t welcome change or adapt in outsider’s eyes. Worse, we have started to think that we don’t embrace change or adapt. See the latest bans on internet or the fear of joining the work force or pursuing advanced degrees. Orthodox Jews are becoming an anachronism and the black hat is the banner of stagnant thinking.

How about this one? Sephardim now wear black hats. To me that is blatant discrimanation. Sephardim wore turbans as their non-Jewish mediterranean neighbors did. Why should their anachronsitic head gear not be accepted and they have to adopt European anachronistic head gear. It just seems narrow-minded and bigoted.

Fast forward 100 years. Orthodox Jewish men will look as silly in their black hats as many of THOSE HAT WEARERS describe chassidic men. Those crazies wear hats from 200 years ago. We are only wearing 60 year old hats! /sarcasm/ Do you see how silly this is?

On a slighty more humorous note, hats are also associated with the Mob ‘look’. Is it a coincidence that so many Orthodox Jews have been in the news (and the prisons) for their Mobster like behavior?

Think about it this way: Would you go to an important job interview wearing a black hat? Is a black hat a normal way of “dressing up” in our society? Of course not? So why should we go to shul or for those that wear their hats at the supermarkets, go to the supermarket in a black hat?

Just because some social phenomena was a certain way in Europe 200 years ago does not make it Jewish or more Holy.

As it stands now, the black hat is the symbol of the yeshivish Jew. If you don’t wear one you are saying “I am not one of you”. That is a pretty drastic statement that one implies by not wearing a hat. So if you mind being labeled that way you probably should still wear that hat.

Personally, I don’t mind all that much. I can still be frum without my hat and I don’t feel like a gangster when I go out of the house.