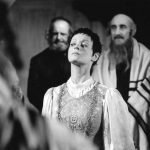 In a bid to produce a sequel to the Exorcist, noted kabbalists gathered in Israel this week to see if they could get a dybbuk out of a man, who had supposedly been possessed while vacationing in South America. The kabbalists could be heard screaming “get out dybbuk” while some of them blew Shofars (rams’ horns) to try and disturb the dybbuk, to no avail. Later on, it was discovered that the man wasn’t an actor, but was, in fact, mentally ill. Rumor has it that the scene is being mulled over at Miramax.

In other Dybbuk news, gedolim were apparently tricked by a Dybbuk to use the internet this week when instead of facing a Dybbuk face to face, they decided to use skype instead. This supposed dybbuk ended up being a case of mental illness as well, but since Freud was a real shaigetz, Rabbonim have decided that mental illness doesn’t really exist and it all really has something to do with shin daleds and the like.

What’s most saddening is that this Dybuk story is true, I’m just poking fun at the absurdity.

← Ebay listing: Pay me to wear tznius clothing – no joke
The Lubavitcher Rebbe is not Moshiach – video from a Lubavitcher →

19 comments for “Kabbalists gather to produce sequel to the Exorcist”