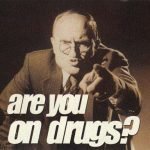 I was listening to this white Jewish author talk about what she tells her kids. It’s okay to do marijuana, she says. She did it. So why can’t they do it, too? As long as they don’t sell it, she’s fine with them smoking up. I mean, didn’t she spend like most of college high anyway?

Then, in the OH NO SHE DIDN’T moment of the evening, this white girl goes on to crack jokes about DARE (say it with me now y’all…DRUG ABUSE RESISTANCE EDUCATION!). In the 80s, it was all about DARE keeping kids away from drugs, gangs and violence. But she says most of those kids ended up mixed up in that stuff anyway.

Girl, well, if they didn’t, who would be around to sell your kids drugs? You gotta keep the status quo, you know? Because you know how white people are about their marijuana. It’s like Starbucks. They can’t live without their fix.

Full disclosure: My aunt’s a cop. The only dirt brown cop for miles sometimes. So you know she wears her badge up high so none of her white coworkers busts a cap in her ass during office hours. Thanks to my dear old auntie, I’ve still got DARE pencils and t-shirts coming out of my ass. When the Pictionary pencils are running low, I pull out DARE pencils from 1985.

You see, when my aunt talked to me about drugs, she kept it simple. Drugs are bad. Drugs will kill you. And if drugs don’t, I will kill you.

Some of my friend’s moms kept it even simpler. They just smacked yo’ ass the hell up! Because black people and Hispanic people don’t be playing around about giving their children that all too necessary beat down.

But in LA, like every white person I know wants to own a dispensary. You know what I’m talking about if you’ve been to Venice Beach lately where for every Rastafarian beret store; they now have three marijuana dispensaries. THREE.

Because you know what happens when white people want to sell drugs. They make it legal.

← Are you frum and off to prison? You may need to know new halachos?
Kosher food certification is modeled after the Mob →