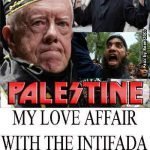 And the Jews had light, and happiness, and joy and honor. Yes, we had all those things and more when President Jimmy Carter sheepishly apologized for insulting our sensibilities and for having the chutzpah to voice his very  own perspective on the Israeli-Palestinian conflict. And wouldn’t you know it- that momzer Abe Foxman was right there, front and center, to magnanimously accept Carter’s apology with the paternalism and condescension that are so becoming in a director of the Anti-Defamation League.

To be fair, Foxman and his family have suffered the terrible consequences of anti-Semitism, and I respect that. Of course, that doesn’t preclude him from being a putz.

Foxman and the ADL purport in their charter to fight “Anti-Semitism and all forms of bigotry [at home] and abroad,” and to “come to the aid of victims of bigotry.” And yet, they were against labeling the Armenian genocide as such, and, when I searched for an ADL response to the massacre in Darfur, I found a webpage that appears to have been inactive since 2004.

And nuch, look at what Foxman has to say about Avigdor Leiberman’s proposal that all Israeli citizens sign a loyalty oath:

“I have a lot of problems with the proposed language because by including a pledge to Zionism it smacks of discrimination,” he says.

What really gets my goat is that whether it is criticism of the Israeli government, or the invoking of Hitler or the holocaust, the ADL seems to think that it is the arbiter of what is or isn’t appropriate. Well, wake up Foxman, you don’t have a monopoly on the holocaust. I don’t know what I’m going to do if I see this guy whining and fidgeting one more time after some British or Norwegian politician  calls someone a Nazi, right before he himself turns around and says something about Ahmadinejad being the next Hitler.

What does all this have to do with Carter’s apology to the Jews? The answer is that these things are symptomatic of a greater hypocrisy that pervades Am Yisrael’s (secular) leadership, and, to some extent, the nation as a whole. It is more than just a chillul Hashem to ignore the suffering of another people- it is an obstacle to peace, and sweeping the hardship of the Palestinians under the rug should not need to be a priority of senior American politicians who are ostensibly here to mediate between the two sides. Look at what Nancy Pelosi said to placate us, in response to Carter’s book: “It is wrong to suggest that the Jewish people would support a government in Israel or anywhere else that institutionalizes ethnically based oppression, and Democrats reject that allegation vigorously.”

Well, let’s see- we’re building a separation wall, Palestinians are forced to stand in checkpoints in order to go anywhere, and all Arab-looking people are subject to random ID inspection. Israeli Arabs receive poorer educations and reduced municipal services. Sound anything like apartheid to you? Not yet? Maybe we should hear what Israel’s defense minister Ehud Barak had to say about it in an article I read in today’s Jerusalem Post: “[If Israel] continues to control millions of Palestinians, it will end up with a state that is not Jewish, or a state which is not democratic – an apartheid state. These two options do not fulfill the Zionist vision which stands at the forefront of the government’s thought process.”

In Barak’s logic, the only reason Israel is not an apartheid state is because we haven’t officially annexed the West Bank and Gaza strip. He seems to be implying that it’s OK to treat people like we are as long as they are not actual citizens of our country- but if they do become citizens, we’re in trouble, because then we will be living in an apartheid state.

At least Barak recognizes that a two-state solution is the only way that we can prevent either 1) the naturalization of the Palestinians, thus ending the Jewish democratic majority in Israel, or,  2) the continued human rights abuses against the Palestinian population.

Carter is fighting for a two-state solution, just like everybody else. Except that because he is not tangled up in corrupt Israeli politics, he is not afraid to state that occupation and building on land designated for a future Palestinian state is counterproductive. I do not hate Israel or the Jews. I served in the IDF, and met plenty of others there who share my opinions. So why must Jimmy Carter hate the Jews just because he criticizes their actions? He doesn’t owe us an apology- we owe him one. Yeah, Carter is pretty hard on us sometimes, but it is sheer weakness and insecurity that forces the Jewish people to quash all criticism of our behavior, denouncing it as anti-Semitism, and it is a shame that the man who orchestrated the first Arab-Israeli peace agreement should be forced to say an Al Chet because a bunch of crooked, pigheaded lobbyists have convinced us that he hates Jews.