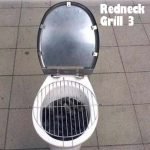 My 12th grade class trip is nothing to boast about, but as the years go by I realize more and more how yeshivish of a vacation it was. We went to the Pocono’s, rented cabins and grilled.

What’s the deal with yeshiva guys and grilling? They love to grill, and they don’t make a fuss about it either. Ever see a bunch of modern orthodox folks around the grill, they poke and prod until they figure out how the thing works and then suddenly they start to debate about meat cuts and ways to grill, and they usually don’t know much about the whole concept at all.

Take a bunch of yeshiva guys throw them in front of a grill (usually those $30 portable things)and you have a meal in 10 minutes, it’s one of the few things they do quite well and making cholent of course. It may have something to do with the George Foreman Grill, possibly the most yeshivish invention of all time right up there with Fabreeze and hat boxes. In my yeshiva they were a fire hazard, but for some reason if you put them on the floor in the middle of the hall way they weren’t a fire hazard.

Speaking of fire hazards, did you know that we weren’t allowed to have extension cords because they were fire hazards? Of course, if a fire were to break out in our yeshiva at night we would have all been roasted alive because the hanhala were too cheap to put batteries in the smoke detectors.

So we went to the Pocono’s and grilled meat, drank beers, and smoked cigarettes. That’s a real yeshiva guy vacation, to go chill and eat and smoke and drink, sans girls unless you happen to be of the ex-yeshiva type, then throw some girls into the mix. In fact we (not I because I am not much a drinker and have never smoked a cigarette in my life) but the class smoked and drank so much that at the end of the trip they thought it cool to stack up the empty boxes and cartons to prove to the world how much they got away with. That was the thing, class trips are your time to be free and we had two good chaperons that let us do what we wanted.

At 17 I got a beis medrish guy to buy me my first gun, a Ruger 10/22 from the local Wal Mart, we had that and a 12 gauge shotgun with us to get rid of all the bottles. So add a gun to the mix, yeshiva guys really love guns, we really do. In fact many of my friends from yeshiva are serious gun enthusiasts.

Guess what else we did, what other items are there to add to the perfect “yeshivacation” for many there has to be some sort of sports car rental, some sort of off road or jet ski type of event and then a fat meal in which they “pounded” some sort of meat. Everything in yeshivacations must be referred to with words like sick, disgusting, pound, and phat.

Since we weren’t in Miami, the yeshivacation of choice, which I never understood, because many yeshiva folks wont sit on a mixed beach. We rented ATV’s and then proceeded to talk about this ATV adventure for days on end. One of the chaperons fell off and hit a tree and I had to listen to the story told by 10 different people over and over, as well as their own stories that all began, “remember when I was” going uphill, coming around a corner, I almost got air, and any other variety of BS that someone may tell about their first time ATV expertise.

Now that I think about it, we hopped in a van, drove 250 miles to the Pocono’s, stayed in a hotel, ate meat, smoked cigarettes, drank beer, shot the bottles and rented ATV’s. The basic rundown of yeshivacations everywhere.

← Charedim refer to homosexuals as an abomination, but being dishonest in business is an abomination too
Can you please take down my video I won’t get a shidduch →