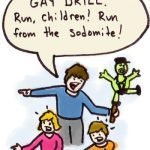 The torah warns us that there are 3 things that are so reprehensible that the only way we can refer to them is as a Toeiva, an abomination. The first and the one that gets referred to most often is homosexual activity. Everybody knows that this is a toeiva, the charedim gleefully refer to homosexuals as “toeiva individuals”, “toeva marriage” “toeiva rights” etc. Eating bugs is equally called a toeiva.

We spend much time discussing the importance of checking vegetables for small bugs, we need to filter our water and I know of one restaurant in Monsey that has an employee whose job it is to sit at a table with a light box and check lettuce a whole day. The final thing that is referred to as being a toeiva is not acting honestly in business. The torah tells us “lo yiheh lechah bebeischa even va-aven gedolah ve-ketana. . . even shlemah va-tzedek yiheh lach, eifah shelemah vatzedek yiheh lach . . . ki TOAVAS HASHEM ELOKECHA kol oseh eleih kol oseh avel”. Yet it is surprising that the same people who are gleefully referring to YU as a toeiva institution and those boys on the panel as “toeiva students” are silent in the face of the Spinka rebbe being sentenced to 2 years in jail and come to the defense of a guy like Rubashkin, to the extent that one rabbi in the 5 Towns feels that it is the bloggers who are to blame for all of the problems klal yisrael is having, not the people creating the chilulei hashem by stealing.

There is a clear double standard when it comes to YU and when is comes business ethics v all other aveiros. For some reason many in the “frum” community are much quicker to forgive someone who commits a crime than someone who engages in other things that are asur. Had the Spinka Rebbe engaged in Mishkav Zachar and then said “chatosi” would the community have been so quick to forgive him? After all only misa is mechaper for chilul hashem.

It is being reported in the Jewish Week that another scandal has hit the “frum” community. A man by the name of Eliyahu Weinstein is accused of running a $200 Million fraudulent real estate scheme. It is also alleged, that some of the money was being run out of various charities, (including supposedly, Kars 4 Kids, an organization that is no stranger to fraud), here we go again. Yet I don’t see anyone referring to Mr. Weinstein as living a supposed toeiva lifestyle when that is what he is accused of doing.

The difference between most of the panelists at the YU forum and people like Rubashkin, the Spinka Rebbe and supposedly this Weinstein guy is that the panelist were struggling with urges that they were fighting off and trying to reconcile living in the Orthodox community while not giving in to their taavos.

These people are living lives of toeiva where they are acting, or accused of acting in the most immoral way, not only that but they are bringing other people in their community into their lifestyle with them. I think that if the panelists at the YU forum can be referred to by various “frum” websites as “toeiva students” it is only fair that from here on in we refer to the Spinka Rebbe as the “Toeiva Rebbe” Rubashkin should be called the “Toeiva Butcher” and should the allegations against this guy Weinstein be proven to be true he shall be referred to from here on in as the “Toeiva Askan”.

← Is the Torah outdated and irrelevant?
Yeshiva Memories: My class trip →