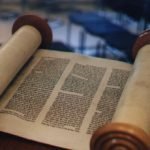 “The gay issue is one of those things that prove to me just how outdated and irrelevant the torah is as a text to live my life by. It has good things in it, but it’s mixed up with so much primitive and sometimes barbaric instructions. It reflects a social ethos that was relevant to the primitive tribes that lived here thousands of years ago. Not really relevant to the 21st century. No offense.

Stoning for gay sex is just one aspect of it. Easy enough for me to solve as a secular Jew.”

The comment represents what I think are the opnions of a large part of the Jewish population at large, and some individuals in the orthodox community too. I myself have wondered about the relevancy of the Torah and although I lead a religious and observant lifestyle, ever since I left high school I have been questioning the whole thing we call Torah Judaism.

Was the Torah merely written from a periodical perspective, or was it written to be as they say, a living Torah? I am almost positive that if the torah were written now it would be drastically different, but we can’t just rewrite the torah, we can reinterpret  like we have been doing for thousands of years – but rewriting seems out of the question – besides – didn’t God write the torah? These is no way we are on a high enough madreiga to ask him to rewrite the whole thing.

The more I try to explain the torah and it’s whacked out things, the more I find myself busting out taykoo’s and halacha moshe misinai, but I can’t just say we will find out when moshiach come’s for everything (sometimes I just think the moshiach thing was invented so we think we’ll get see our relatives again) and so that the Lubbies have something to scream about at fabrengins.

Even as a Torah Jew I struggle with the fact that much of the torah is irrelevant, but what are we supposed to do about this? Maybe it will come to something like the Constitutionalists or the revisionists?

Going to Israel? Get 2 for 1 cell phone rental deals

← Talk and Save Israeli cell phone rental deals
Charedim refer to homosexuals as an abomination, but being dishonest in business is an abomination too →

194 comments for “Is the Torah outdated and irrelevant?”