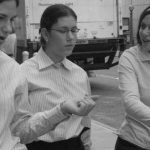 A man is in critical condition today after he was beaten by a modesty squad in the Jerusalem neighborhood of Meah Shearim. Witnesses say the man was looking across the street at a crowd of women, when the attackers jumped the man and told him that he wasn’t being tznius. They then beat him up with rolling pins and other kitchen appliances.

Bystanders merely stood by and watched as the sinner was publicly shamed for his misdeeds. One witness told us that the modesty squad was just doing its job in maintaining certain decorum in the neighborhood and that any man caught ogling a woman was liable to be beaten. Another man told us he was very happy that there such a squad to squash out any other untznius activities like looking at, touching chas v’shalom and talking to women of any age.

FS – News has also learned that the squad supposedly turned its attention to the police that were helping the man with his injuries and gave them a beating too, for supporting such a “minuvel” as one of the squad called him. Apparently the squad is also known to beat up men for taking seats in the back of mehadrin buses where the women usually sit.

Although many of our American readers have expressed shock and horror at the incident, they continue to support Charedi institutions like the Modesty Squad of Meah Shearim. It is rumored that the Modesty Squad has even begun compiling sponsors for it’s first annual Chinese Auction set to rival Oorah and Chai Lifelines auction by spending money collected by men claiming to widows with 6 children from Israel that tend to knock on doors in suburban American neighborhoods late at night. From our understanding, Chinese Auctions are so tempting that people tend to overlook what the cause is, and only care about ridding thmselves of their maaser money and winning a sexy new sheitle or a brand new freezer for the garage.

This is a parody of the following story

53 comments for “Man beaten in Meah Shearim for ogling women”