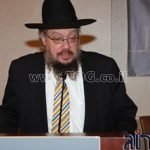 is almost without precedent in thousands of years of Jewish history.” As quoted by Vos Iz Neias about Rabbi Leib Tropper sex tape scandal.

It seems to me and you all can correct me if I am wrong, that not talking about something such as Leib Tropper is a bigger chillul Hashem. Since when is an article stating facts as per recorded on tape a chillul Hashem. Sure it makes frum Jews look bad, but covering things up and letting these so called community leaders and rabbis deal with them hasn’t really helped much.

Unfortunately, this year, our community has seen a huge amount of chillul Hashem, we have the kidney rabbis, Rubashkin, Madoff and countless other minor fraud and sexual abuse cases scattered around, not to mention the huge chillul Hashem sponsored by the shabbos riots in Israel over the parking lot and Intel. So is talking about these things, in a public forum a chillul Hashem?

Go back a few years and count the numerous scandals that have been shoved under the rug until they were leaked and made even worse by the media creating a bigger chillul Hashem.

Go take a gander at articles on Vos Iz Nieas and Yeshiva World News whenever someone in the frum community (not chabad or modern orthodox of course) is accused of anything. The readers deny it and ask for proof and just wont believe that a suppposedly “frum” or “heimishe” yid would take part in something so gruesome. I think it’s time these people wake up and begin to talk as much as possible about things in a public forum, to me it seems like one more deterant to the people who participate in these crimes against the people.

I myself wish this Leib Tropper thing would blow over, because there is much to talk about, but I feel the need to do this and these discussions always produce some interesting halachic discussions.

54 comments for “Is talking about Leib Tropper in a public manner a chillul Hashem?”