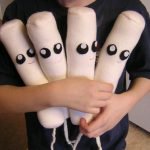 Sent to me via email and asked to remain anonymous

Last night in order to celebrate my cousin’s son’s bar mitzvah, along with my parents and other relatives, I made what has become an annual trek to the enigmatic anachronistic Wisteria Lane-esque town known as Lakewood, New Jersey.

In typical “anonymous me” fashion, I managed to forget to pack tampons in my tiny evening bag. It was at the point of being deep in Lakewood territory that I realized my error and informed my dad (yes, you heard that correctly) that we must stop at the nearest pharmacy. Not a familiar CVS, Duane Reade, RiteAid, or Walgreens to be found. The first pharmacy we encounter is…

Since beggars can’t be choosy, we stop and I run inside. The only person manning (non sequitur: what is the origin of the verb “to man?”) the store was the uninformed pharmacist. In the aisle for ‘feminine products’, the only available relevant item was sanitary napkins, or pads. Sorry for the graphic detail but no one above the age of 3 or below 93 should be advocating their use; It’s one tiny step away from Pampers or Depends. Since the shelves are all somewhat bare, I think it’s possible that they are sold out. But that is really only the benefit of the doubt talking. When I asked the pharmacist if it was store policy not to sell tampons, he hadn’t a clue. He simply said, “I have come to realize that alot of things are done differently around these parts; Maybe this is just one of those things.”

Today, out of sheer curiosity, I decided to investigate further and called the pharmacy. I figured at the very least I should get to the “truth” of the matter. (Pun intended.) In response to the question of whether they carry tampons, the guy who answered the phone abruptly answered in the affirmative. When I pointed out that I had been in the store the night before and no tampons had been on the shelves, he admitted that “actually, we don’t really carry them. They don’t move that fast here so we just don’t carry them. If someone asked for it, we would get it.”

196 comments for “Do frummies use tampons?”