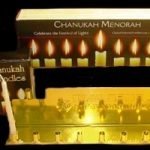 A woman plans to sue the Jewish missionary movement known as Crushed Hats and Beards, claiming that the free menorah she received from them at a local mall, despite its model having been recalled by the manufacturer, to have caused her house to catch fire when it failed to hold up to the rigors of inexperienced chanukah candle lighters like her self.

The woman claims that she was walking through the mall, when a man who had been talking to a group of “Israeli looking” kiosk managers, turned to her very rudely and asked if she was Jewish. She described the man as unshaven and very religious looking and she was frightful, but she felt bad because he was so young and excited, after she replied yes – he asked about her lineage – before giving her a menorah, box of candles and a yellow flag.

She recalls thinking that the menorah looked “rather flimsy” and she assumed that due to the shaky economy and the fact she was a woman, she had received the batch reserved for questionably Jewish women. “I heard about these missionaries, getting unsuspecting non-practicing Jews to come over for meals, light candles and make donations to their movement,” the woman says. She didn’t give him any money, but claims that when she went home an overpowering urge to light the menorah took over her and she lit it.

The Crushed Hats and Beards Press Secretary told us that she was a lying misnaged and that she had made such claims before. “Did you know that she tried to sue Telze Yeshiva for choking on the free charoses they mail out before Passover? – Everyone knows that it’s just a sample of the wonderful outreach that Telze Yeshiva does and you’re not really supposed to eat it. To be honest, I use it to seal up my windows”, Menachem Mendel Hecht-Krinsky told Fs-News.

Many inside sources tell us that this woman is in fact a Kiruv scam artist, pretending to be non-observant and than scamming organizations for millions. Rumors have surfaced of her many different scams, including posing as a non-Jew and ripping off countless families during her chometz buying scams, getting free tefillin from the tefillin bank and reselling them, selling inauthentic kabbalah strings by the stairs to the kotel, posing as a beggar who doesn’t speak English that has six children needing to be fed and she may have been the mastermind behind the Uman scandal of fake flights earlier in the year.

“That’s preposterous,” she told us FS-News at a recent one-on-one interview, that she agreed to on condition of anonymity. “I have no idea what any of these things are – a bearded man gave me a faulty menorah, it caused damage to my house and suddenly they try and paint me as fraud, something doesn’t seem right, next I can imagine them trying to claim I had something to do with bringing Rubashkin down.” Angry words from a woman who according to fire investigators, placed her menorah on a shaky table, which has a remarkable resemblance to a table recently stolen from a nearby kosher pizza store.

Fortunately she has already garnered the support of anti-CHaB media throughout the world. Many websites claim that “Crushed Hats and Beards menorahs are notoriously flimsy” and “the candles tend to break and shave off important length when trying to place them inside.”

The woman is planning on filing suit for compensatory and pecuniary damages totaling $2 million.