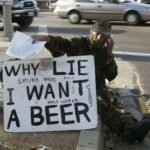 The best thing about being a yeshiva dropout, bum or off the derech kid is that unlike the rest of the population it’s considered perfectly normal to be in college at the age of 25, although these jobs are usually held by yeshiva guys who aren’t really yeshivish or learning anymore, I am sure there are others who hold them. These are those jobs that kids in New York do – prior to bribing their ex-Rosh Yeshiva to give them a bachelors degree so they can attend law school without ever having step foot in a university before. Please not that ex-yeshiva guys are usually still frum, they are just sick of the system and fizzle out…

Catering: There is always some guy named Josh or Ari that you call and he puts you on the list. You get called and told to be at some hall in New Square where you “waiter” for $75 cash a night, the skills involved, know the right people, looking bummy, smoking and keeping chassids out of the kitchen looking for a better piece of kugel. You should also be someone who went off the derech at some point, attended RCC or Brooklyn College and is in school.

Esrogim and Lulavim: You sit inside an abandoned seforim store or some other store that was closed about a month earlier. You sit behind a fold table on a folding chair and agree with the customers as they say, “that’s a good esrog right?” Your skills involve making those little lulav ties and the ability to play Jewish Geography with every person who walks inside.

Bais Ezra and Women’s League: You heard you can make $300 in a weekend and you have a chance to meet some girls. You are scared you may have to wipe some grown mans butt, but the money is too good. You don’t really like working with the consumers, but Bais Ezra is always hiring and if you want you have at in at Women’s league too.

Cell Phones: It used to be beepers and electronics, but now its cell phones. You have to be obsessed with showing your phone off. You also have to know about phones, be addicted to your phone and drive a black Lexus or maxima from wheels to lease. You should also be someone who hung out in Woodbourne during the summers and wears yarmulkes that increase your height.

Chinese Takeout: You must be chubby, sort of religious and have terrible taste in food. You should also be under 24, have glasses and be unshaven. You should also always have a couple friends sitting at a table bored out of their minds but they hang out there all the time. Skills include telling people which dishes are spicy and asking them if they want wonton or hot and sour soup.

Construction: You get to wear jeans to shul, and your phone is always in walky talkie mode. You must have a thick New York accent and own a couple of properties here and there. You must be a hocker and you must drive a truck or windowless van.

Real Estate: One time you worked in a real estate office getting coffee for people, you also used to work construction and did light bookkeeping for a real estate agent. You really don’t do anything, maybe you bought some property from Geshmak realty in Lakewood – prime Camden or Newrak real estate. You never really went off the derech, but all your friends did. Skills include making up fictional tales about all the property you own.

Fast Food: (IE Dougies) Different from Chinese takeout because it may involve light waiter service, if that’s what you call it when some guy drops your food down trying to remember who ordered what and he brings your salad after your main course. Skills include dealing with customers, and having to fend off people who see you in the street and say “hey do I know you from somewhere” Must be off the derech, and could even be modern orthodox, or modern looking.

Hatzolah, Chaveirim, and volunteer firefighting: How come frummies never become regular firefighters or work for triple A? Don’t get me wrong, I think all these jobs are great – but I keep meeting these ex-yeshiva guy, used to be off the derech types who are striving to be hockers and always wanted one of those Monsey houses with all just a lawn and no trees. If you are an ex-yeshiva guy who does this sort of job, you must always keep your walky talky on loud volume so everyone in the minyan factory knows how you roll. These jobs don’t pay, but it’s all about the prestige.

Car Leasing, Mortgages, Debt Consolidation, Computers: Most of the people I meet who can get me a good deal on a computer, mortgage or car lease don’t actually work in the field, but part of being a 25 ex-yeshiva guy wannabe hocker who is just starting to scheme his way through FDA or Charter Oaks, is knowing the right people in these fields. So whenever someone says “I’m in car leasing” a little probing will reveal that he hangs around some guy who actually does that so he knows a little more than your average Yossi.