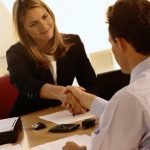 It has been debated amongst all sects along the spectrum of Jewish Orthodoxy for years as to whether shaking hands with the opposite sex is kosher. In past years, it has been thought that shaking hands for business purposes was 100%, according to most, except for the ultra orthodox which would never find themselves in such a difficult predicament anyway, since they don’t do business with women.

Unfortunately the situation has degenerated and we have found numerous cases of simple business hand shaking leading to unimaginable acts of immodesty. According to Dr. Stephenson, who has been studying hand shaking for years, 24% of all hand shakes between the sexes ultimately lead to sex and that amongst Orthodox Jews that number could even be higher. In the past, Dr. Stephenson has claimed that hand shakes between the sexes are never platonic, one party, usually the male, is always thinking of the next move. Could he touch her elbow? Compliment her hand shaking abilities? There are countless opportunities and methods to take the hand shake beyond that of business.

The situation has become dire, in that many orthodox Jews think they can shake a woman’s hand without any feeling and that is simply not the case. Our studies prove that hand shaking is sexual for most men, since hands can be used to stimulate as well as any other part of the body. Men rarely think hand shakes are business. We also find that in some cases, women make the first move beyond that of business — many women give cards with a hand shake and that is obviously meant to mean something more, possibly sex after the meeting.

Rabbi Jacobowitz of the Modern Orthodox Rabbinate Of November (or “M.O.R.O.N”) couldn’t agree more. Rabbi J. has been a lone ranger against hand shaking for business purposes, and he has been seen as a rogue and possibly a closet charedi for maintaining such opinions. He has lashed out at the leadership of the Modern Orthodox community and has long held the stance that hand shaking between the sexes leads to sex. He has tried to prove that the derech chiba loophole is simply for siblings and family members and has nothing to do with folks outside a large family, in his controversial article titled: “Why there are so many shotgun weddings in the modern orthodox movement: a plea against hand shaking for any reason.”

Dr. Stephenson’s position is that Rabbi J.’s article is completely inconclusive and urged everyone not to jump to any conclusions. Since Orthodox Jews tend to avoid surveys of any kind, Dr. S. has simply had to hire private investigators disguised as businessmen and women to shake hands and see where it leads well beyond the first and second handshake — and that these results could be debated in the scientific community.