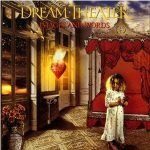 The door flew open and I immediately took the tape out of the deck and hid it under my covers. I was lying in bed listening to Dream Theater’s Images and Words Album, I was blown away by it, it pounded out of my tape deck into my oversized sony headphones, but I was always on alert for intruders. No, this wasn’t a war, this was more of a game between Rabbis, Dorm Councilors, beis medrish guys and us – the lowly high school guy, forever at the wrath of everyone else. Having our rights trampled upon, and in this case it was music.

Don’t get me wrong, music was perfectly fine, we could listen to all of the frum music we wanted, all of those horns blaring and bearded men howling out ancient torah texts in tunes that we sang every shabbos and I nor anyone I was very good friends with wanted to have anything to do with it. Why would we want to listen to depressing brass orchestras singing the morning prayers? But, all was not lost, for in their sympathy the Rabbis had permitted us one leniency, we could listen to non-Jewish music with headphones on – or instrumental music without headphones – but those sneaky Rabbis knew that 15 year old boys from orthodox homes didn’t really have a penchant for Jazz or Classical music.

So I shoved my tape under my covers, waiting for the Dorm Councilor to leave, he may or may not check the tape deck, but I switched to the oldies station just in case he checked my headphones. They were quite ruthless, I remember kids getting entire music collections taken away, never to be seen again. The meaner folks would break CD’s and cassettes in half, to torture the kids.

I myself didn’t care much, any CD’s I had stored away were in fact stolen from BMG and Columbia House several years before those companies realized that thousands of prepubescent kids were scamming them out of thousands of dollars worth of music by getting the free stuff and then not going by the rules. I don’t think it hurt my credit because I spelled my name wrong – I was pretty smart for a fifth grader.

But the tapes I had, were of a friend’s, a friend that I would hold responsible for opening my mind to the fact that there was music beyond the radio. That Van Halen and Led Zeppelin had great songs that weren’t hits and the introduction to a world of instrumental metal and rock, allowing me to soak up the music of Joe Satriani and Jeff Beck – sans headphones.

My friend seemed to have dozens of collections, he was from the Midwest and apparently there was a store in his town that sold tapes at the ridiculously low price of 3 for a buck. He was witness to the destruction of much music, but he strode on to become one of the few true music junkies I know.

I don’t where they are now, but I can remember certain albums that changed my life, or that I at least listened to over and over again. Van Halen’s Balance, Def Leapard’s Hysteria and Joe Satriani’s album The Extremist, I would listen to these over and over again and still have them all on my I-pod, but for the life of me I have no idea where they are. I do remember lending a box of tapes to my friend in Philly, but have since forgot of them, luckily I never had any music taken away or destroyed by my Rabbis.

They claimed that non-Jewish music destroyed our souls and that when we listened to it our souls became connected and we could even get their evil inclinations. All of it never made any sense, because if that was the case any Jewish singer with a non-Jewish band may be problematic. What was the difference if the music was instrumental or not? It was still non-Jewish.

Oh how I wish I was jazz fan in high school…

← Do you hate going to the Mikvah?
The Christian Side Hug: modest hugging for non-Jews →