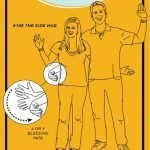 The Chrsitians have just realized that hugging may be a little immodest, full frontal hugging that is. Someone just sent me this rap song called “Gimme Dat Christian Side Hug” (watch the video below) which makes me feel for the kids who had to be at the concert – it’s almost as painful to watch as the Miami Boys Choir, almost!

The Chrsitian Side Hug is exactly what it sounds like, instead of giving a full on hug like teenagers love to do, you give a side hug. The side hug will prevent, the two people hugging from touching crotches, the frummies would never think of such things beause if the two parties had already succumbed to their hugging taivas (desires) they are too far off the derech to come back.

According to Stuff Christians Like, there’s no “exact scripture reference” banning normal hugging. But the Side-Hug does significantly lower the “risk of two crotches touching,” which has got to be in the Bible somewhere. Here’s how you do it:

Instead of face to face, you go side to side, putting your arm around the person and your hip against their’s. Still having a hard time mastering it? Pretend you’re taking a photo and you’re both looking at the camera together. The side hug, or A frame as it is also called, is safe for the whole family, friendly and above all holy.

The critics don’t seem to like it much, and who can blame them.

The Washington City Paper writes:
“The Christian Side-Hug strikes me as almost skeezily chaste—I’d much rather have a brief normal embrace with a stranger than a hip-tap from a person who I know sexualizes even the most mundane forms of human contact. But the Side-Hug itself is slightly less offensive than the medium being used to promote it: An appropriated version of “rap music” performed by a bunch of white youth pastors who think that mixing in some  gang-ish hand signals, tying on a bandana, and securing some fake bling will bring the youth to God.”

19 comments for “The Christian Side Hug: modest hugging for non-Jews”