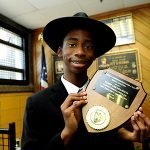 Walking down the street in Los Angeles, a little blond seven-year-old Jewish girl sees a black Orthodox Jewish man in a black suit, black hat, white shirt and tzitzit flying in the wind.

“Wow, that’s weird,” she says to her mother.

Her white Jewish mother holds her breath waiting for the next statement.

“Did you see that, Mom?” she says tugging on her mother’s sleeve. “That rabbi’s wearing an IPOD!”

138 comments for “Sighting: The Black Jew”