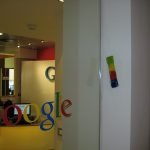 I really enjoyed your classification of yarmulkes, Shabbos greetings, shul talkers, etc., and while I was in Denver this past weekend I noticed a number of different methods for recognizing the mezuzah. I broke them down into seven different classifications and jotted down some thoughts. If you can post them on your blog and advertise it a bit, I’d be happy to read any comments your followers might have.

The Standard—This method is performed with kavanah but also out of obligation and without much thought. It’s pretty similar to when we hit the “accept service charge” key on ATM touch-screens. The person knows why he/she is doing it, and while it’s not quite a reluctant touch per se, it’s not carried out too merrily either. While “the standard” is not necessarily used by the most experienced people, I have noticed that almost all rabbis and yeshivish folks are privy to this method.

The Doorbell—Perhaps the most solemn style of mezuzah recognition, this method may also be referred to as “the stamp.” The person recognizes the mezuzah as he/she would a doorbell, and presses it as such before bringing the two primary fingers towards the lips in robotic fashion. The forearm and wrist remain in-line, and the only bending of the arm is at the elbow. This usually occurs when someone is new to a shul or just visiting, and he/she is unsure of where exactly the mezuzah is located. It may thus be construed as a symbol of the person’s “just visiting” status.

The Swipe—Many older men with untrimmed beards use this method, whereby they see the mezuzah out of their peripheral vision and non-chalantly run their two primary fingers down the length of it. The hand retreats almost to the thigh before being swung upwards to the lips for a relatively loud kiss. Occasionally, the kiss will resonate throughout the minyan and an akward silence will ensue. The man then looks to his left and right, trying to play it off as though he didn’t just deliver such an audible smooch, but then the davening resumes after everyone realizes that it’s not that big of a deal. A lot of people can pull this off without a loud kiss, and for those who can, it can look pretty sweet. It’s a lot like the moonwalk in that respect. It’s cool if done well, but if not, it can be awkward for everyone watching.

The Flick—This is used by most younger kids, as well as older bochurim and Hillel/NCSY men and women. With The Flick, all of the fingers gently slap the side of the mezuzah before making a boomerang-type movement back towards the lips. For the youngest kids, ages 7-12, it’s usually carried out on Shabbos, after they drink too much iced tea at lunch. They flick it, find their dad or the candyman in the minyan, and quickly depart the shul to resume their game of tag outside. For the older guys and girls, it’s more like a high-five, as if to say, “You’re alright, mezuzah!”

The Double-Tap—Many women use the double tap, and I’m not sure why this is the case. Perhaps it is a precautionary measure to ensure that the Yentas of the congregation don’t start spreading rumors of untznius behavior. It’s like saying, “Touch, oh, look—another touch for good measure.” This is followed by a prolonged kiss with eyes closed, almost as if to determine whether it needs more salt. Wow, that sounds pretty sexist, so to make sure that you don’t think I’m a mysoginist, I must say that I’ve seen it done by men as well, and I’m equally unsure of the reasoning behind this. With men, it resembles dipping a feather into ink, or challah into salt. Maybe it’s done to suggest extra kavanah on the part of the kisser. Regardless of the reasoning, it gets the job done.

The Backhand—This method is employed most often among folks who have been to a particular shul long enough to have obtained muscle recognition for walking through the door. The Backhand is carried out almost completely unnoticed: while looking into space towards the opposite wall, a backhander flips his wrist backwards, towards the mezuzah until the back of his/her middle finger makes contact. The hand then hovers for a couple seconds above the shoulder and is slowly brought towards the lips for a subtle kiss. It is most often employed by middle-aged men who want to illustrate their mastery of the shul entrance, or by men who want to kiss the mezuzah incognito, lest their masculinity level decrease for a few seconds.

The Full-On—I’ve only seen this done once, and it was by an elderly fellow whom everyone knew and respected. While it’s uncommon, I must admit it’s rather touching to see someone kiss a mezuzah as one would kiss one’s grandchild, slowly and intently, as if to say, “Chazak chazak v’nitchazek!”

Kyle Southard is a cadet at the US Air Force Academy in Colorado Springs, CO, and often spends Shabbos at a shul in Denver.

10 comments for “The different ways to kiss the mezuzah”