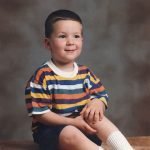 A lawsuit filed in federal court today accuses a shadchan, a traditional Jewish matchmaker, of discrimination. The plaintiff, Joseph Schwartz, filed suit against Chaya Bluma Friedlander after she refused to set him up, based solely on the grounds that in high school he had worn shirts with stripes wider than legally permitted width, as per the official yeshivish by-laws.

Since Mr. Schwartz is what we call an Alter Bochur (loosely translated as a male spinster), I was a little lax with him on certain things, recalled Mrs. Friedlander. “He grew up in the 90’s before the extreme shift to the right that our community has since taken. For instance, I understood that his siblings didn’t all dress in sailor outfits, or that his mother didn’t serve 3 kinds of chrain on shabbos.” Mr. Schwartz declined to comment.

Several Talmudic authorities have told FS-News that the matchmaker was not only justified, but that Schwartz would probably be blacklisted from many heimishe matchmaking services and may have to live out the remainder of his days in the modern day Sodom that is the Upper West Side. Striped shirts have been unacceptable for years, one rabbi told us. Schwartz should have known better – he should have burned all of the evidence. We understand that destroying the evidence may be the only way to get a good shidduch nowadays. Clearly, this is one of the reasons for the current shortage of good guys.

The shidduch crisis is just an excuse, created by shadchans who didn’t want to acknowledge the simple fact that most guys were too busy learning all day to concentrate on the important things like clearing up the evidence of their questionable pasts. Countless good guys have been blacklisted simply because they stepped foot in Woodbourne during summer z’man, or because their sister decided to marry a learner-earner.

Sources close to the family tell me that they are ashamed of their son’s striped shirts. His first cousin, Freda, told us “Joseph is way past his prime, and combined with this, it would surely mean he would have to move out to a singles community” (the last part was said in a brisk whisper). Freda also confided in FS-News that she was going to change her last name so that this wouldn’t impact her own shidduch resume.

His parents are adamant that Joseph’s wearing striped shirts were his only act of rebellion. G-d forbid would he talk to a girl or go to a pizza store on Motzoi Shabbos – but he insisted on those striped shirts and they went along with it because “they [striped shirts] are easier to clean than whites.  If only we would have measured those stripes to make sure they were regulation size.”

← What does your Shidduch Resume look like?
Hasid for a Day →