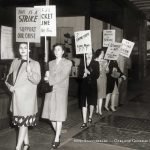 The National Shadchans Association is demanding higher commissions and if those demands aren’t met, they will strike. The National Shadchan Association (NSA) is made up of about 1200 professional Shadchanim. In order to apply, a Shadchan must be married and have made at least 25 shidduchim. 25% of the members are men and membership has swollen in the last few years due mostly to the shidduch crisis and the rush to get married as fast as possible before there are no boys left.

Chani A. told FS-News that she is sick and tired of being paid next to nothing for being what she calls a therapist and marketer and someone akin to a used car sales person at the same time. “You would not believe the demands that some people have these days, they want her to be this beautiful person inside and out, while they can be the ugliest, most nasty person.” Apparently everyone thinks they are fit for a king or queen and clearly, that’s just not the case.

We have also learned that the younger members of NSA are less demanding because they are newlyweds with no experience who just want to get a free pass to Olam Habah, but senior NSA members are flabbergasted at the low commissions, sometimes as low as $500 per match. Another member wishing to remain anonymous informed us that she had to keep a second job as a sheitle macher just to make ends meet. When we asked her if “ends meet” had anything to do with her Lexus SUV and diamond bling, she had no comment.

The strike, expected to take place sometime next week, has parents scrambling to find their kids suitable matches, since the NSA has stated that any ongoing matches will be grandfathered into the new commission structure, which we have been told, may be a drastic change from the traditional “only pay if you get hitched” policy. FS- News has learned that NSA is seeking to charge everyone that uses their service, regardless of results (i.e. actual nuptials). Surcharge fees for ugly people, picky people, older singles and broken engagements are all on the table.

Malki S. reminded us that broken engagements are one of the biggest pains for a shadchan — it’s like selling a high priced entertainment system and having it returned. Fees for broken engagements will vary based on the amount of prior engagements broken and the age of the couple – similar to insurance. We have learned that some couples merely get engaged to satisfy friends and family, receive some gifts, eat some soggy broccoli salad and then break it off before the hall has been reserved. Malki S. also revealed to us that Older Singles are next to impossible to set up and rather than face discrimination lawsuits, they will simply charge them a higher fee to deal with their “pickiness” (a coined term).