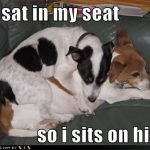 Two men were injured today at what bystanders have been calling a makom kavua confrontation. Witnesses say that a modernishe guy entered the shul a little bit late and took the first seat he could find, shortly afterward, a large burly fellow with a scruffy face and a lot of dandruff on his shoulders demanded that the young man leave the spot he was sitting in because he claimed it was his brother in laws seat. Since the young man was just back from Israel, he was having so much kavannah that he didn’t look up from his prayers, until the burly man started cursing him out in Yiddish, telling him that he wasn’t even Jewish – a scuffle started and both men started throwing punches.

“It was nothing like I had ever seen, and at first most people thought it was just two people clopping the shtender to remind everyone to say yale vayavo” one witness stated.

The Rav of the shul is horrified that such an incident could get so out of hand, he admits that the shul has a strict makom kavua policy and that some of the older members of the shul call themselves the makom kavua police – but this kind of thing has never happened – and on Rosh Chodesh to add insult to injury – “at least it was a two day rosh chodesh” – he added.

According to Michel Morris its been a problem for years, he says that the folks who get most incensed about makom kavua’s are the same guys that sound like they are going to kill the lainer when he makes a mistake – they also tend to yell at children making noise in shul and they get mad when the chazzan doesn’t sing the tune. Michel also told FS – News that he couldn’t understand how the shul could ever welcome new members or outsiders if there weren’t any seats. The Rav told us that there plenty of seats at the front of the shul, but that his members tended to stare at newcomers making them feel uncomfortable.

One modern orthodox Rabbi informed us that in his shul the makom kavuahs were clearly marked by seat cushions, old dirty tissues and makeshift shtenders – and that they didn’t allow makom kavuah police to operate on the premises. When asked why they couldn’t be more friendly like the modern orthodox shul, the Rav responded that those people didn’t have makom kavuahs because they never actually came to shul.

Although the young man declined to comment as to whether or not he would be pressing charges, we think he is going to sue the shul for discrimination against his yarmulke style.

86 comments for “Fight takes place in shul over Makom Kavua”